What Is Panic Attack?

A panic attack is a type of response to fearful situations. These responses are normal responses generated by the brain like feelings of stress, excitement, or danger but in panic attacks, these responses occur in exaggerated form. Panic attacks build up the physical symptoms quickly which include pounding heart, dizziness, feeling hot or too cold, sweating, trembling, nausea, loss of breath, feeling dissociated from your body, and extreme pain in the chest area. You might feel like you are losing your control over your body, or having a heart attack, or are going to faint. 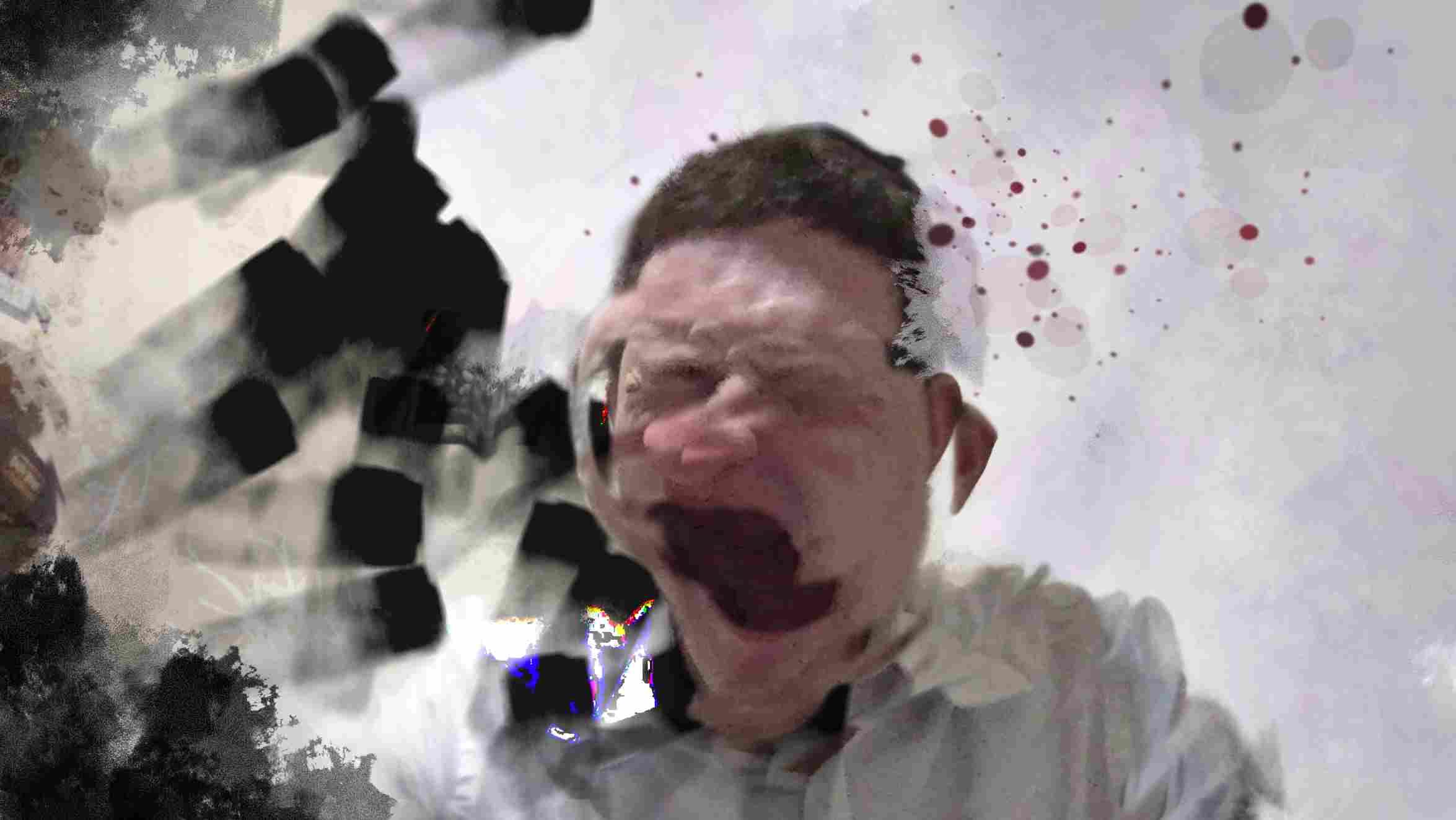 Occurrence of a Panic Attack

Panic attacks do not occur in a particular sequence or pattern. One person might have a panic attack once in their lifetime but some may have it on a more regular basis. You might get a panic attack when present in a stressful situation. These usually last up to 5 to 20 minutes. These occur as a quick response and you may not have time to calm yourself down. During multiple panic attacks, the duration of the attacks lasts longer than a single panic attack.

Panic attacks may be frightening for you but it’s important for you to focus on your breathing while the attack is being initiated. This will reduce the severity of the attack and will help you calm down. Focus on your senses or stamp on your foot. This will help to maintain contact between the brain and body. If you find it difficult to deal with it yourself then visit a therapist and ask for suggestions and recommendations about tips to reduce the chances of getting a panic attack. 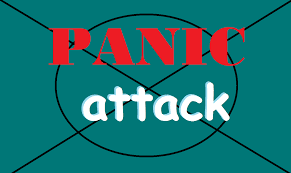 There are different factors related to the occurrence of panic attacks. The impact of the factors can differ from person to person. The role of genetics is also involved in determining the likelihood of a person experiencing a panic attack. The other causes of panic attacks depend on psychological, pharmacological, and environmental factors.

The psychological factors generally include chronic stress, anxiety, depression, OCD, PTSD, phobias, lack of self-esteem, and lack of assertiveness. Direct exposure to phobias can cause panic attacks in people which hinders the communication skills of a person. A person suffering a panic attack finds it difficult to engage in active conversations.

The pharmacological causes of panic attacks include alcohol or drug withdrawal, side effects of certain medicines, and excessive caffeine intake. People who get addicted to drugs, alcohol, or certain medicines, after realization of adverse health effects they try to quit it. The body which is not used to such an environment generates the response of fear in the form of a panic attack. Extreme substance abusers going through their withdrawal period often get panic attacks due to a lack of substance in their bodies.

Some studies also suggest that there is no particular cause of occurrence of a panic attack and it is body normal fight or flight system response that gets triggered when there is no danger. Studies also suggest that the use of drugs like marijuana and nutritional deficiencies of zinc or magnesium can become a factor for developing panic disorder. It has also been said that people who develop a panic disorder or anxiety disorder are likely to have a history of anxiety sensitivity.

Anxiety sensitivity is the tendency of a person to fear that body sensations related to anxiety will have dire personal consequences. Like a person feeling chest pain or upset stomach may feel that their heart might stop or they might throw up. Physical and sexual abuse in the early years of adolescence can also contribute to developing panic attacks.

The symptoms of panic attacks are:

A panic attack is a distressing condition and its symptoms can feel like a heart attack. People having multiple panic attacks without any triggers may negatively change their behaviour due to their attacks and the burden they feel they are putting on others.

Nocturnal panic attacks occur in sleep and the person suffering from it wakes up from sleep in a state of fear for no apparent reason. People having sleeping disorders have panic attacks in the form of symptoms and it can last till the person calms down. Symptoms of panic attacks may increase or decrease during the pregnancy period.

How To Deal With Panic Attacks?

Panic attacks can be very distressing as well as can affect the mental well-being of many people.

During a panic attack, you need to assure yourself that the symptoms are temporary and nothing harmful would happen to you. Try to continue doing things that you were doing. Confront your fear and anxiety. Don’t run away from the feeling and try to calm yourself down.

Take deep breaths. Deep and mindful breathing can help in bringing panic attacks under control. Panic attacks cause rapid breathing and tightness in the chest. Try breathing deeply, slowly, and concentrate on your breathing. Use 4-7-8 breathing technique. In this technique breath in for 4 seconds, hold your breath for 7 seconds, and exhale slowly for 8 seconds. In some cases, deep breathing may increase the intensity of the panic attack.

A soothing scent or smell relieves anxiety as the person stays grounded and it gives them something to focus on. Lavender is known to bring a calming sensation. Holding lavender oil under the nose or inhaling it gently during the onset of a panic attack will help in calming down. You can replace lavender oil with other essential oil like lemon, chamomile, or orange depending upon your preferences.

Isolate yourself from crowded places and find a peaceful spot. It will be easy for you to breathe and concentrate in your surroundings. This peaceful spot will help you to reduce the intensity of a panic attack.

Focusing on objects, thoughts, feelings, and memories will help you stay grounded in a physical environment. Studies suggest that focusing on a stimulus can reduce the effect of other stimuli. When someone focuses on an object then it reduces the effect of the panic attack. Such techniques are known as grounding techniques.

Follow 5-4-3-2-1-rule. This rule states that look at 5 different objects, listen to 4 different sounds, touch 3 objects, identify 2 different smells and notice 1 taste in your mouth. This rule is a grounding technique and is a type of mindfulness. 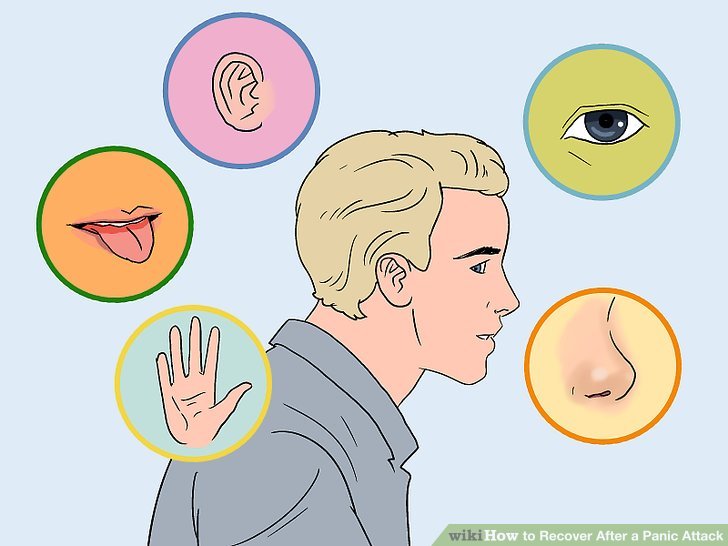 At the onset of a panic attack walk away from the stressful environment. Walking will induce a rhythmic pattern of breathing which will help you in regulating the breathing pattern. Moving releases good hormones like endorphins which improve the mood and reduces the effect of the panic attack. 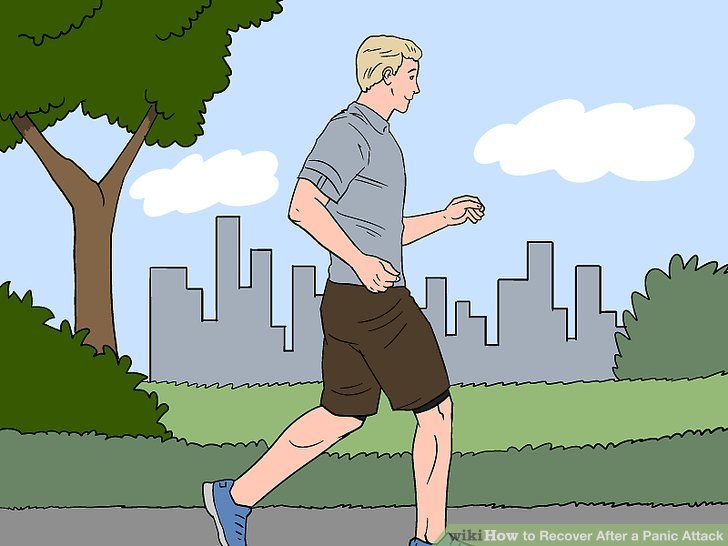 Muscle relaxing techniques also help in limiting panic attacks. In this technique, the brain senses that the body is trying to relax then the brain will reduce the intensity of the panic attack. The progressive muscle relaxation technique involves the activity to hold the tension of 5 seconds and then say relax as you release the muscle. Keep on moving to other muscles one by one and relax your body.

If your doctor or therapist prescribes you medicines then take them regularly. Medicines work faster in panic attacks. Some medicines contain beta-blocker which slows down the heartbeat and decreases the increased blood pressure due to panic attack. Other medicines prescribed by the doctor may inhibit the occurrence of panic attacks. These medicines become addicting and should be taken only under prescription for a particular period of time.

Tell someone about your panic attacks. Ask them to help you out in managing your stress levels. Learn and identify your triggers. By identifying your triggers you may be able to avoid the situation and reduce the intensity of the panic attacks.

Dealing With A Person Having Panic Attack

If you are with someone who has panic attacks and doesn’t know what to do then you can follow the below-mentioned tips:

Panic attacks can be scary and frightening but there is nothing much to be worried about. If you have frequent panic attacks then it is advised to visit a doctor or therapist for the same. Doctors can help you with the usage of coping methods and can also give long-term treatments. Panic attacks can’t be predicted beforehand. But you can always avoid them by letting out your stress and overcoming your fears. Long-term treatments like a healthy lifestyle, therapy, and stress management can reduce the intensity of panic attacks.