The narcissistic personality disorder was first formally recognized by Freud. It is named after this mythological figure Narcissus, the handsome Greek youth. He became so entranced with his reflection in a pool of water that he could not tear himself away.

Thus, it is characterized by an inflated sense of one’s importance, a deep need for admiration, and a lack of empathy for others. Furthermore, these characteristics are usually accompanied by anger or rage when critics arise or success eludes them.

What Is Narcissistic Personality Disorder

Narcissism is a very complex mental disorder that has many factors to be considered in diagnosing and treating the patient.

Essentially, a narcissistic personality disorder is a condition where the patient experiences deep-seated self-esteem issues. The person’s sense of worthlessness can result in delusions about themselves or other people around them.

Narcissists are often insecure but cover up their emotions with false pride to make sure others don’t know. These personalities are often pretentious and likely to interject themselves in conversations.

Their arrogance and self-centeredness may cause the person to monopolize conversations. In addition, they may not be able to recognize other people’s emotions or feelings.

NOTE: A person with this disorder may be unwilling to recognize flaws in themselves.

Narcissistic Personality Disorder can be thought to have two main types:

It is associated with:

It is identified with:

NOTE: Being a narcissist is not the same as being conceited or egotistical. As it does not involve inflated self-views that are held by everyone else to be grossly exaggerated. Instead of this trait of normal self-esteem, narcissists have an unstable sense of self. It is highly vulnerable to criticism and unstable relationships.

Traits Of a Narcissist 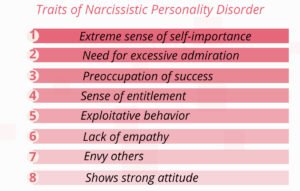 Narcissists think that everyone should praise them. And if others do not comply with their demands for constant admiration, a narcissist will often become angry and aggressive towards those who don’t agree with his/her views.

Furthermore, they believe in their superiority. To the point that it becomes difficult for anyone else’s ideas, suggestions, or needs to be taken into consideration. It is mainly because they lack empathy and have an inflated sense of themselves. 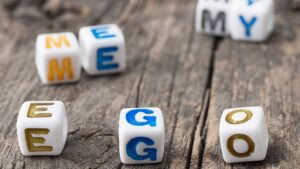 When you know that this is what narcissism looks like, it isn’t difficult to see when someone has narcissistic tendencies or full-blown NPD (narcissistic personality disorder).

The following are some of the things that a narcissist might do, to ensure his or her gratification. These traits can be rather manipulative and harmful towards other people. They include:

When it comes to narcissistic personality disorder (NPD), risk factors can be:

A person may show traits that lead to narcissistic personality disorder if they have been constantly praised since childhood, or suffered from emotional abuse.

In addition, people with first-degree relatives who have NPD are more likely to develop the condition.

It has also been found that narcissists are more likely to be middle-aged as opposed to younger adults.

Dealing with a Narcissist

It’s not easy to deal with a narcissist. Since they are very manipulative and treat people as objects, it can be difficult to establish boundaries. But here are some ways you can handle the situation when dealing with a narcissist:

Avoid talking about them behind their back

Doing so can exacerbate feelings of insecurity and low self-esteem, which narcissists already suffer from. The best way to deal with a narcissist is to be direct.

Talk about them face-to-face

You should ideally opt for it without the help of others who might have an agenda that doesn’t match your own. This will also make it less likely for you to say something out of anger or frustration which you later regret saying. As it can cause problems in future interactions with this person. You should stick to the facts and avoid bringing in irrelevant details

Frame what you say

Make it appear as though you’re giving suggestions rather than making demands or criticisms. Narcissists don’t like someone pointing out their flaws. So instead of saying “you always leave your dishes on the coffee table,” say “it would be nice if we cleared our plates from the living room together every night.”

So when you talk with them, hold yourself back a little. Narcissists are very sensitive to emotions. So if they perceive that you’re sad, angry, or disappointed, etc. It will be harder for them to think clearly and calmly.

Take time out before responding

This can help you avoid saying something in the heat of the moment that you might later regret. Taking a time out can also help calm the situation down. It is especially important if things have become heated during your conversation.

Don’t expect them to change or apologize for their behavior

Narcissists don’t see themselves as having any problems and rarely take responsibility when confronted with the damage they’ve done. They’re simply looking for a way to get you off their back. They don’t see anything wrong with themselves, so expecting them to change or apologize is pointless.

Narcissists have a very black-and-white view of the world and can be unwilling to listen when they feel attacked or criticized. They will tend to respond defensively and may lash out at you. Let them know that their feelings are not the issue. But rather their behavior is what bothers you.

NOTE: Narcissists are unable-or unwilling-to change on their own. It is because they see their actions as justified. If you are dealing with a narcissist, the best thing to do is surround yourself with people who have your back and encourage you in being more self-assertive when it comes to standing up for yourself.

A narcissistic personality disorder is a very serious mental health condition. It can have detrimental effects on its victims. Some of the consequential effects of NPD are listed below:

When To See a Doctor In Narcissistic Personality Disorder

Most of the time people who have narcissistic personality disorder are aware that they require constant admiration from others. They might feel lonely, empty, irritable when their ego is not being adequately fed by other people’s attention. Sometimes it happens that narcissists become aware of their condition only when other people start describing them as selfish, arrogant, and demanding.

It is usually not necessary to see a doctor for narcissistic personality disorder. Because most people with the condition don’t seek treatment. But if you feel that your symptoms are negatively impacting your day-to-day life and relationships, talk to someone about it. You can seek professional help or reach out to a family member or friend.

If you have any suicidal thoughts or feelings it is important to seek professional help immediately. Narcissistic personality disorder can be dangerous. Because the risk factors for suicide are higher in narcissistic individuals who might act on their suicidal thoughts.

Narcissistic people have no problem berating and belittling others to get what they want. And this can lead them to act aggressively if they feel that someone wants to take away that power or praise they receive from others.

Thus, if you find yourself feeling constantly criticized, demeaned, or manipulated by a person with a narcissistic personality disorder. It is important to seek professional help immediately.

If you feel the need to talk about your situation with a therapist it is important to find someone who specializes in narcissistic personality disorder. Since not all therapists are competent for this type of treatment. So make sure you do some research before making an appointment.

If you have trouble finding someone experienced enough in narcissism, you can also try reaching out to a family member or friend who has previously dealt with narcissistic people.

People who have been diagnosed with narcissistic personality disorder (NPD) may benefit from:

Therapists resort to specialized therapies such as cognitive behavioral therapy, psychoanalytic treatments to deal with this disorder individually or in a group setting.

Some clinicians may consider dialectical behavior therapy for those who have problems regulating their emotions and exhibit self-destructive behaviors.

The commonly prescribed medications include antidepressants. These include selective serotonin reuptake inhibitors (SSRIs) and tricyclic antidepressants, mood stabilizers such as lithium, anti-anxiety drugs like benzodiazepines.

Treatment of those who have narcissistic personality disorder can help prevent the development or worsening of this condition in their children. Parents need to set limits and model good behavior.

The most important thing to remember is that narcissistic personality disorder affects the way people think about themselves and others. It’s also important not to confuse a person with NPD for being selfish, as they are more likely to be self-serving than other people.

These individuals can have difficulty maintaining relationships. But it doesn’t necessarily mean they’re incapable of empathy. People with this trait just need to take from people the right amount to feel good, but they might not care about other people.

If you suspect that a friend or a family member has this condition, don’t hesitate to reach out! There are many resources available online for understanding what living with NPD feels like on an emotional level. Thankfully enough, there are plenty of therapists who specialize in helping people with personality disorders.