What Is An Anion Gap?

It is used to measure the acid-base balance in the blood. The serum anion gap is defined as the amount of serum chloride and bicarbonate concentrations minus serum sodium concentration, as determined from electrolytes measured in a chemical laboratory. Your blood contains sodium, chloride, and bicarbonate ions.

The body maintains a balance between the cations (base) and anions (acid) by either releasing or holding up carbon dioxide from the lungs and bicarbonate ions through the kidneys. The difference in the cations and anions present determines which of the either needs to be released or production should be halted in order to attain a neutral level.

The anion gap blood test is used to determine if your blood has an electrolyte imbalance or too much or too little acid. Acidosis is a disease in which there is too much acid in the blood. Alkalosis is a disease that happens when the blood lacks enough acid.

An anion gap can be high, normal, or low. In high anion gaps, anions are presently more than the cations leading to acidosis in the body. In a normal anion gap, kidneys absorb chloride instead of the reabsorbing bicarbonate ions leading to hyperchloremic acidosis. A low anion gap occurs rarely and causes alkalosis.

The serum anion difference should be between three and ten mEq/L (with an average of six mEq/L). The total CO2 content contains serum bicarbonate as well as other sources of carbon dioxide, with serum HCO3- accounting for approximately 95% of the total CO2 content. As a consequence, this measurement is commonly used to estimate serum HCO3- levels. 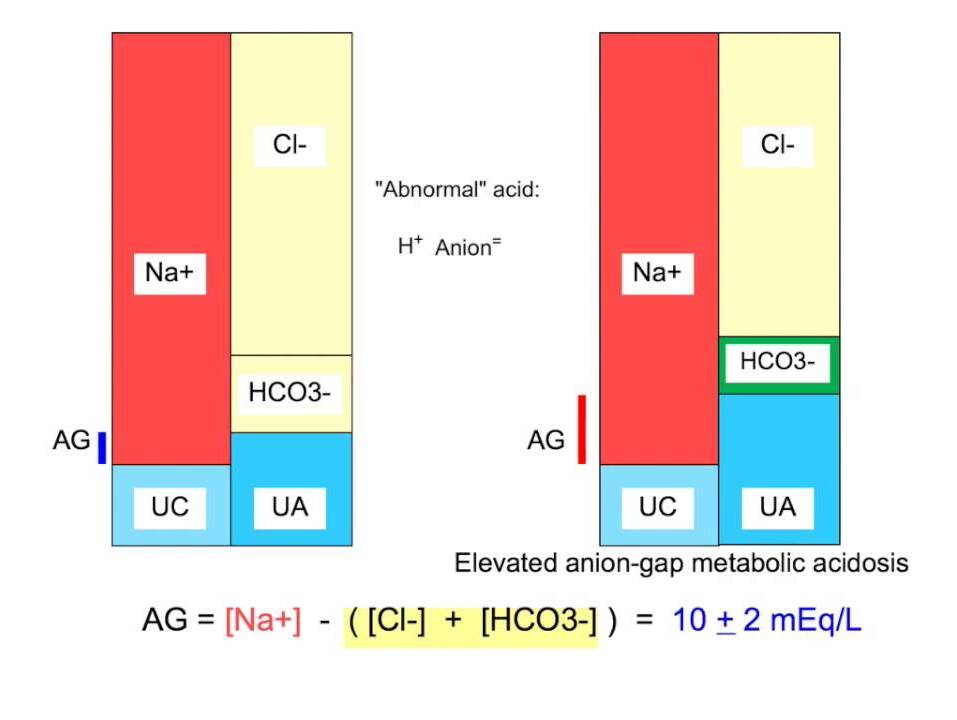 Though mild acidemia is usually asymptomatic, high anion gap acidosis can cause the following symptoms and signs:

The symptoms of high anion gap metabolic acidosis are usually non-specific, though dyspnea and dysfunction of central respiratory center stimulation are common symptoms that are observed. As a result, it is important to test for harmful ingestions, such as aspirin and acetaminophen overdoses.

It’s also important to watch for signs of diabetes or renal failure. Other than an anion blood test you can also take up a test that can detect pH level in blood and urine, dissolved gases in the blood, lactate-glucose-ketones, creatinine, and blood nitrogen test. The healthcare provider will recommend your tests according to the diagnosis done. 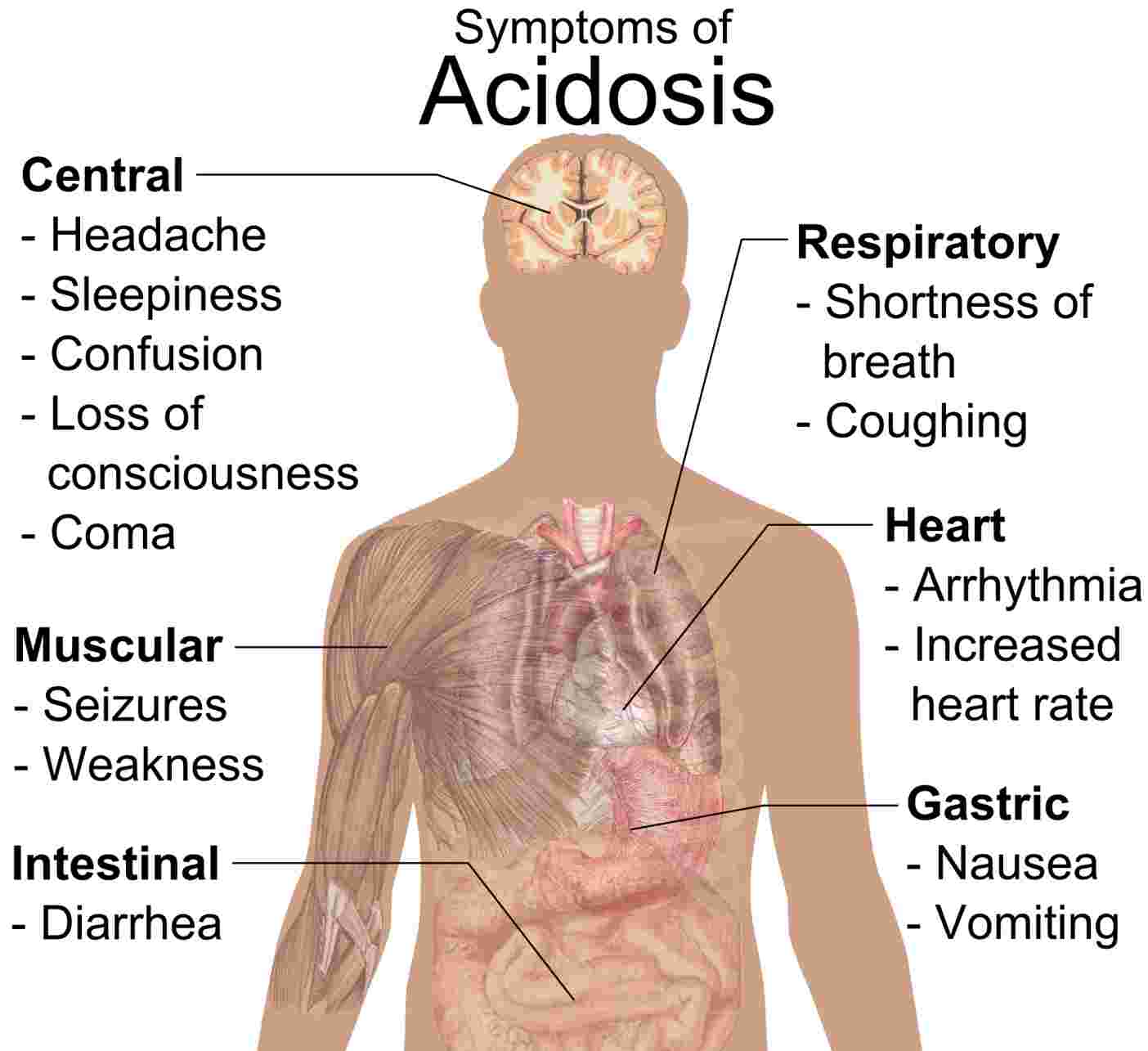 The low anion gap is a rare condition but can be caused due to hypoalbuminemia, monoclonal and polyclonal gammopathy, bromide intoxication, and an increase in the positively charged ions.

Hypoalbuminemia is a condition in which the blood contains low amounts of a protein called albumin. Since albumin is the most abundant circulating protein, changes in serum albumin concentration are expected to affect the serum anion gap. The following conditions will result in lower-than-normal albumin levels- liver diseases, such as cirrhosis, kidney disease, infection, burns, cancer, and hypothyroidism. Hypoalbuminemia is the second most common cause of the low anion gap.

An increase in the number of proteins in the blood that have a positive or negative charge at physiological pH may cause changes in the serum anion gap. As a result, anomalies in the serum anion gap would be caused by the overproduction of monoclonal immunoglobulins (paraproteinemia), such as IgG and IgA. IgG has a cationic nature, whereas IgA has an anionic nature. As a result, patients with IgG myeloma have a smaller serum anion difference than healthy people (4,26). The serum anion difference in these patients can be slightly below the laboratory’s mean value, below the normal range, or even negative in extreme cases.

The serum anion gap level and the concentration and net positive charge of IgG paraproteins have a clear inverse relationship. As a consequence, the highest concentrations of paraproteins are correlated with negative values or values below the normal range.

Furthermore, decreases in paraprotein concentrations after treatment are linked to a standardization of the serum anion gap. In the presence of polyclonal gammopathy, the serum anion difference may also be decreased. A blood test to determine the number of immunoglobulins in your blood may be prescribed by your doctor. To help track and diagnose the disease, they can also order a serum or urine protein electrophoresis examination.

Bromide is a halide with a negative charge. Bromide concentrations in the blood that are abnormally high can cause a number of dermatologic, psychological, and neurologic symptoms. Though bromide is negatively charged and therefore should technically increase the serum anion gap, it actually causes a reduction or even a negative anion gap. Bromide can be used in sedatives, myasthenia gravis medicines, and some herbal remedies.

However, since bromide is no longer commonly used in drugs, other causes of a negative anion difference are more likely. Given this, bromide intoxication should be considered and ruled out in patients with a negative serum anion gap if other factors are not apparent.

Lithium is a popular prescription drug used to treat bipolar disorder. Since lithium is a cation, when it is present in adequate concentrations, it can reduce the serum anion gap. A reduced serum anion gap may be a hint to the existence of lithium toxicity in people who have clinical symptoms that are consistent with it.

Your blood is more acidic than average if your anion gap value is high. It may mean you’re suffering from acidosis. Metabolic acidosis, which is caused by the overproduction or reduced excretion of acid, is the most common condition associated with an elevated serum anion difference.

One or two protons and a related anion make up many of the physiologically essential acids. If the acid in the blood is hydrochloric acid, the serum anion difference should remain unchanged so an equal amount of chloride ions are maintained in the blood to preserve charge neutrality as bicarbonate ions are titrated by the retained protons. This type of metabolic acidosis is normal anion gap or hyperchloremic metabolic acidosis.

An electrolyte pattern can also be caused by bicarbonate loss in the urine (which can occur with different forms of renal tubular acidosis or chronic renal failure) or in the stool. The loss of bicarbonate, as well as its counterbalancing cation sodium, is thought to induce volume contraction, which stimulates the renal tubule to retain sodium chloride. This results in the replacement of sodium bicarbonate by the sodium chloride molecule which in turn results in a change in the anion gap.

If the accumulating acid is lactate in lactic acidosis or -hydroxybutyrate in ketoacidosis, the decrease in serum bicarbonate will be followed by an increase in the unmeasured anion concentration. This is referred to as a high anion gap. Acidosis with a large anion gap is usually caused by an excess of organic acids or a proportionate reduction in anion excretion. Lactic acidosis, ketoacidosis, toluene intoxication, metabolic alkalosis, respiratory alkalosis, and severe hyperphosphatemia cause a spike in the anion gap.

The test does not require any special preparation which needs to be done beforehand. your healthcare provider would brief you on whether you need to fast for the test or not. Some other blood tests require fasting which might be compulsory for the patients who need to go for other blood tests too.

In this test, blood is extracted from the veins of the patient. During a blood test, a health care provider extracts blood from a vein in your arm using a tiny needle. A small amount of blood would be extracted into a test tube after the needle is inserted. When the needle goes in or out, it can hurt a little. It normally takes less than five minutes to complete this job. Taking this test carries very little risk. You can experience some discomfort or swelling where the needle was inserted, but most effects fade quickly.

Your results can be hampered if you are dehydrated or retain water in your body. Antibiotics like penicillin may also have an influence on the result. The anion gap blood test will reveal crucial details about your blood’s acid-base balance. However, since there is such a wide variety of normal outcomes, your doctor can suggest further testing to make a diagnosis.

If your results indicate a large anion difference, you could have acidosis, which means your blood acid levels are higher than average. Acidosis may occur as a result of vomiting, diarrhoea, or excessive exercise. It may also be a sign of something more serious, particularly kidney failure or diabetes. If you have a low anion difference, it could suggest that you have a low level of albumin, a protein in your blood. Low albumin levels may be a sign of kidney failure, heart disease, or some form of cancer. Due to the rarity of low anion gap outcomes, retesting is often performed to ensure that the results are correct.

A delta ratio is measured to help assess the cause of a high anion gap acidosis, and Winters’ calculation is used to evaluate whether respiratory compensation is present or whether there is a second acid-based condition. 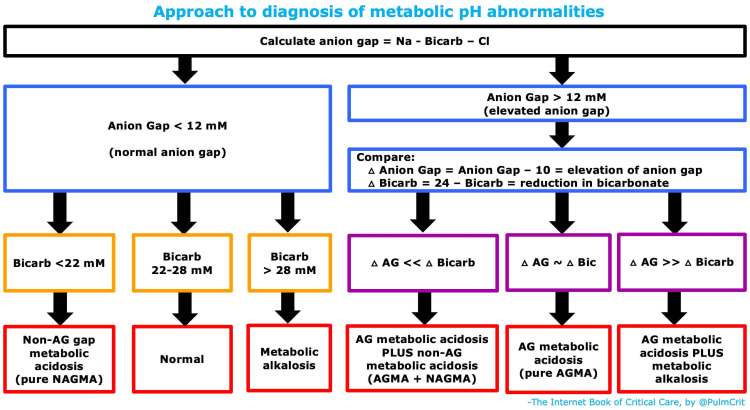 Alkalization treatment can only be used in the case of extreme acidosis. Renal failure, and also ethylene glycol, methanol, and salicylate poisoning, necessarily require hemodialysis. If a patient has serious, recalcitrant acidosis, it may be effective to control them with alcohol dehydrogenase inhibitors (fomepizole or ethanol) and prepare them for emergency hemodialysis.

Through competitive inhibition of alcohol dehydrogenase, fomepizole inhibits the conversion of alcohol into toxic metabolites. Bicarbonate therapy is generally safe and successful when metabolic acidosis is caused by a loss of bicarbonate, as in natural anion gap acidosis.

Treatment with sodium bicarbonate for high anion gap acidosis, on the other hand, is controversial and is usually reserved for extreme metabolic acidosis with low bicarbonate and a pH below 7.1.

It is important to get treated on time and do as instructed by the healthcare advisor. The change in the anion gap may occur due to some underlying cause that needs to be determined as quickly as possible to avoid further complications from the disease.