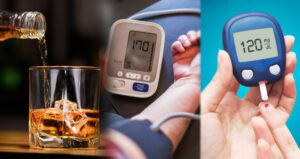 Diabetes and alcohol are both common health issues. It is characterized by high blood sugar levels, which can lead to nerve damage, kidney failure, heart disease, and stroke among other things. Alcohol consumption can lead to many different health problems from liver disease to cancer-and the risk only increases with increased drinking. It’s important to know that these two issues are just as dangerous individually as they are when paired together.

Diabetes is a common endocrine disease that can cause major health problems if not treated. This occurs when the body either does not produce enough insulin or cannot use insulin properly. Insulin helps control blood sugar levels, which are vital for survival.

Symptoms of diabetes include-

Alcohol is defined as any beverage containing ethanol, often obtained by fermentation of sugars found in fruits, vegetables, and grains. While moderate alcohol consumption may have some health benefits, it’s important to remember that there are also many risks associated with drinking. This includes liver disease, brain damage, and an increased risk of developing certain types of cancer.

How Alcohol Affects the Body?

Once you’ve had a drink, the body quickly absorbs alcohol into the bloodstream and it is then transported to the liver where it is metabolized. This process takes about an hour for men and one-and-a-half hours for women and first-time drinkers. However, those with diabetes will often feel the effects of alcohol more quickly. Diabetics lack enough of an enzyme called dehydrogenase which helps metabolize ethanol. As a result of this deficiency, diabetics remain drunk longer than non-diabetics even after drinking less alcohol.

Alcohol And Symptoms Of Diabetes 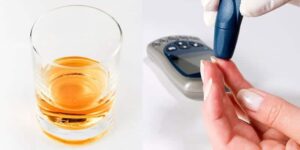 Alcohol can worsen the symptoms of diabetes by causing dehydration, low blood sugar levels, and high blood triglyceride levels which can cause pancreatitis. Those who drink heavily are at an increased risk of developing type 2 diabetes. High amounts of alcohol may also lead to hyperglycemia (high blood sugar) or hypoglycemia (low blood sugar). For example, drinking three glasses of wine could increase one’s blood sugar level as much as eating four slices of bread would. All this is harmful because it increases one’s risk for long-term health problems.

Alcohol causes nerve damage that leads to vision impairment or blindness as well as affects balance and coordination. It is best to limit alcohol consumption on special occasions rather than make it an everyday habit due to the numerous risks associated with drinking.

Diabetes makes you more sensitive to the effects of once you have had a drink because after you drink alcohol it is absorbed into the bloodstream and sent to the liver where it is processed. After about an hour for men and one and a half hours for women with diabetes usually feel the effects of alcohol more quickly than non-diabetics. If they have the same amount to drink. Diabetics lack enough of an enzyme called dehydrogenase which helps metabolize ethanol thus leading to people feeling intoxicated for longer periods of time after drinking less alcohol.

Diabetes can also cause nerve damage which may lead to vision impairment or blindness as well as affect balance and coordination, making it difficult to walk without stumbling or moving hands and fingers normally. Thus diabetics are more likely to experience situations like falls or car accidents due to increased sedation and/or decreased motor coordination. 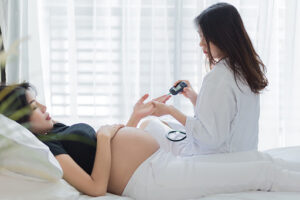 Women who drink during pregnancy may be at risk for a variety of serious health problems like gestational diabetes. Including miscarriage or stillbirth, low birth weight infants, physical and mental disabilities, and a potentially life-threatening condition known as fetal alcohol syndrome (FAS). FAS is much more likely to occur in children whose mothers drank heavily throughout the pregnancy – four out of five such babies are born with some kind of deficiency or deformity. Their facial features are often distorted as well as smaller than normal. In addition to causing FAS, heavy drinking during pregnancy can also lead to other forms of mental retardation as well as developmental problems later on in childhood. Pregnant women should never drink, and women who would like to become pregnant should limit their alcohol intake as much as possible.

One of the most common complications for people who have diabetes is cardiovascular disease – a problem that often leads to death. Diabetes also increases the risk of nerve damage, kidney failure, and blindness.

Alcohol causes your blood sugar level to rise in two different ways: It can interfere with the way your body releases stored glucose, and it may also reduce your liver’s ability to use that stored glucose (glycogen). Alcohol also interferes with the way insulin helps glucose reach cells. Either of these things could be a problem if you already have type 2 diabetes. People who are obese or overweight are at the greatest risk for developing diabetes. Some studies show that drinking too much over time makes it more likely you’ll become diabetic than if you don’t drink at all. Although some studies do show an “inverse” relationship between moderate drinking and lowered risk of heart disease, which is linked to diabetes, more research is needed to know whether moderate drinking really does protect against diabetes.

Risks For People With Type 2 Diabetes 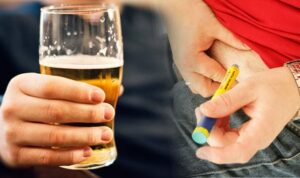 People with type 2 diabetes appear to be at increased risk for developing heart disease and other cardiovascular problems if they drink too much alcohol. One reason for this is that even small amounts of alcohol can interfere with the action of insulin, which can make it harder for you to maintain a normal blood glucose level. Drinking heavily over the course of many years may contribute to obesity (a major risk factor for type 2 diabetes), high blood pressure, and other factors that cause cardiovascular disease. If you already have heart disease or other serious conditions related to diabetes, your risk of developing further serious problems due to alcohol use is even greater.

Can Drinking Alcohol Lead To Diabetes?

Drinking too much on a regular basis may make you more likely to develop type 2 diabetes. One study showed that men who drank 25 or more alcoholic beverages a week were 80% more likely to have type 2 diabetes than those who did not drink at all. Other studies have shown similar results for women and for people of both genders who consumed more than 14 drinks a week. Drinking can also interfere with medications designed to reduce high blood sugar levels in diabetics. It obviously increases the likelihood of these dangerous complications from occurring. In one study, heavy drinkers were four times as likely as nondrinkers to require insulin treatment for their diabetes.

Can Drinking Be Good For Your Heart?

There’s growing evidence that alcohol in moderation can be good for your heart. It appears that the benefits of red wine may be due to its high content of antioxidants, substances found naturally in certain foods and drinks that may help prevent some diseases. But even if drinking red wine every day gives you the best odds of avoiding heart disease. It doesn’t improve your chances of not developing diabetes or other insulin-related problems. If you already have diabetes, alcohol probably isn’t the best way to lower your risk for cardiovascular disease. Quitting smoking will benefit both conditions much more than drinking ever could. Besides, people with diabetes have to be much more careful about their blood sugar levels. So you have to consider your overall health and diabetes management when deciding whether to drink.

Can Diabetes Be Controlled With Alcohol?

No. For one thing, the amount of alcohol needed to ‘cure’ diabetes would almost certainly kill you anyway. More importantly, your body can no more cure itself of diabetes than it can cure itself of cancer or any other serious disease by drinking large quantities of alcohol. Your liver may be able to process moderate levels of alcohol, but that won’t help your pancreas produce insulin again or undo the damage that heavy drinking causes on a cellular level.

Wine does contain some antioxidants which are believed to fight heart disease and certain types of cancer. But this effect is derived from non-alcohol components in wine. Specifically, resveratrol is found in grape skins. Beer, white wine, and distilled alcohol contain no resveratrol at all. Furthermore, none of these benefits are likely to apply to individuals who drink heavily or in excess. Since the negative effects of excessive drinking far outweigh these relatively minor positive effects when averaged across several people.

Do I have To Give Up Drinking Completely?

Most experts do recommend that you stop drinking altogether if you feel that your consumption is out of control or unhealthily high. If this isn’t an option for you right now, then even reducing your intake by half can help safeguard against many health-related problems associated with alcohol abuse. Remember though once you start drinking it’s much harder to stop than it is to cut back on your consumption gradually over time. If you’re not able to stop drinking completely, then the least you should do is avoid heavy drinking days.

Will Losing Weight Reduce The Effects Of Drinking?

Even losing a significant amount of weight will not fully reverse all of the damage that has already been done. As long as you continue drinking, your body doesn’t have a chance to recover from the effects of past overindulgence. Some studies have shown that obese people who drink heavily can experience changes in their brain function similar to those experienced by people with Alzheimer’s disease. This type of evidence is especially convincing because it shows actual biological changes brought about by excessive alcohol use. Rather than merely demonstrating that heavy drinkers perform poorly.

Quitting alcohol not only reduces the risk of diabetes but also provides several health benefits. For example-

Excessive stress causes many changes in the body’s chemistry over time. So choosing to drink alcohol when you are already under a lot of stress isn’t going to help matters one bit. On the contrary, it will only make things worse by placing additional strain on your liver and heart. While making you more irritable and impatient with other people. Once again, it’s not just about the fact that you’re drinking too much. But also how it affects your life overall if you have trouble stopping once you’ve started.

If you struggle with diabetes and drink alcohol, it’s important to know the effects of these health issues. The most significant effect is that drinking can affect blood sugar levels in diabetics. That can be dangerous if not properly monitored.  This was all about how alcohol affects your body when combined with diabetes, what type of food should be eaten before or after drinking (and why). As well as other tips for managing this condition while enjoying alcoholic drinks. We hope this helps.

Tips For Drinking Alcohol In Moderation

The following are some tips for drinking alcohol to diabetics: 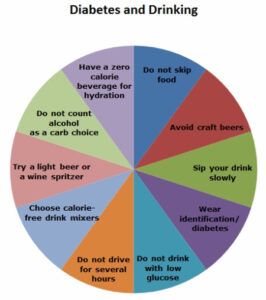 Drinking more than normal can be harmful to your health, especially if you have diabetes. Alcohol can spike up your blood sugar levels and interfere in the treatment of diabetes. A diabetic should avoid drinking, and if they have to drink then it should be in moderation.