Do you find yourself eating even when you’re not hungry? Do you feel like you can’t control what or how much you eat? If so, then you may be struggling with a food addiction. Compulsive eating is a real problem, and it can have serious consequences for your health and well-being. In this blog post, we will discuss the causes of compulsive eating and offer some tips for overcoming it.

Compulsive overeating is an eating disorder characterized by episodes of binge eating followed by feelings of guilt, shame, and distress. People who struggle with compulsive overeating often eat large amounts of food in a short period of time and feel that they can’t control their eating. Binge-eating episodes are usually accompanied by feelings of self-loathing and despair. Afterward, people often try to ” compensate” for their binge by purging (vomiting), fasting, or excessive exercise.

It is important to note that not all people who overeat are compulsive eaters. Overeating can be a normal response to certain situations, such as celebrations or holidays. Compulsive overeating is only considered a problem when it begins to interfere with your daily life and causes you distress.

Difference Between Compulsive Eating And Other Eating Disorders

Compulsive overeating is often confused with other eating disorders, such as bulimia nervosa and binge-eating disorder. However, there are some key differences between these disorders.

Bulimia nervosa is characterized by episodes of binge eating followed by purging (vomiting), fasting, or excessive exercise. People with bulimia nervosa typically have a normal body weight or are only slightly overweight. In contrast, people with compulsive overeating are usually obese.

Although there are overlapping features, compulsive overeating is a distinct disorder with its own set of causes and consequences. 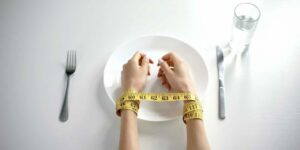 There are a number of signs and symptoms that may indicate that you are struggling with compulsive overeating. These include:

These are some of the more common signs and symptoms of compulsive overeating. It must be kept in mind that everyone experiences this disorder differently. Some people may only experience a few of these symptoms, while others may experience all of them.

There is no single cause of compulsive overeating. Rather, it is thought to be the result of a combination of factors, including:

People who have busy, stressful lifestyles are more likely to develop compulsive eating habits. This is because they often turn to food as a way to cope with stress.

On the contrary, people who have sedentary lifestyles are also at risk of developing compulsive eating habits. This is because they may eat out of boredom or use food as a way to relieve boredom.

Some research suggests that there may be a genetic component to compulsive eating. People with close relatives who have struggled with eating disorders or obesity may be more likely to develop an eating disorder themselves.

Furthermore, some research suggests that compulsive overeating may be caused by a difference in the way the brain processes food. For example, people who struggle with compulsive overeating often have lower levels of the “feel-good” hormone serotonin. This difference may be due to a genetic predisposition or an imbalance of certain hormones or neurotransmitters.

Research studies also suggests that compulsive overeating may be linked to certain genes that affect how the brain responds to food cues. These genes may make people more sensitive to the sights and smells of food, which can trigger an uncontrollable urge to eat. This is common in people with ADHD and Autism. 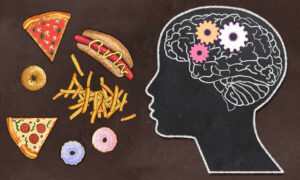 Certain psychological factors, such as low self-esteem, depression, anxiety, and stress, can contribute to compulsive overeating. It may also be a way to cope with difficult emotions or situations.

Social pressures and messages about body image can contribute to compulsive overeating. The media often portray thinness as the ideal body type, which can lead people to believe that they need to be thin in order to be happy and successful. This pressure can be especially difficult for people who are already struggling with their weight.

One can develop food-related disorders from any of the above-listed causes. It is important to acknowledge and honor the causes, as it is the first step to healing.

If left untreated, compulsive overeating can lead to a number of serious physiological problems, including:

It may also manifest as mental health concerns, which can lead to the development of disorders such as:

Additionally, it can hamper the quality of life by having negative impacts on other domains of life such as:

Professional help for compulsive eating can be from a mental health professional, a nutritionist, or both.

Oftentimes, a psychologist and nutritionist may also collaborate to provide the most comprehensive and effective treatment for compulsive overeating. 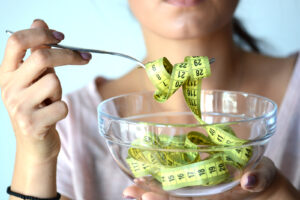 Compulsive overeating is a serious problem, but it is treatable. If you think you may be struggling with compulsive overeating, please seek professional help. With treatment and support, it is possible to overcome a compulsive eating disorder and lead a healthy and fruitful life.

In conclusion, compulsive overeating is a serious problem that can be effectively treated with professional help and self-help strategies. If you think you may be struggling with compulsive overeating, please seek help from a qualified mental health professional or nutritionist. With treatment and support, you can overcome a compulsive eating disorder and lead a healthy and fulfilling life. There is no shame in seeking help, and there is no reason to suffer in silence.

If you are looking for an inclusive, safe, effective, and also an affordable source for seeking support and guidance for eating disorders or any other mental health concern, reach out to Mantra Care! We have a team of expert mental health professionals from all across the world providing the best quality treatment for your mental health. You can contact us to book a session or you can also download our free Android or iOS app for more information!