Autism can be difficult to diagnose at a young age, but there are many telltale signs that parents and doctors should look out for. There are some key warning autism signs in children to watch out for. Such as eye contact avoidance, lack of speech development, and repetitive behavior patterns. 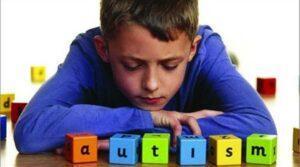 Autism is a neurodevelopmental disorder that affects how a person communicates and interacts with others. It can also affect a person’s ability to engage in social activities and everyday tasks. Autism spectrum disorder (ASD) is the term used to describe a range of symptoms associated with autism.

There are three main characteristics of autism that doctors look for when diagnosing the disorder: impaired communication, social interaction, and repetitive behavior patterns. Some of the other common signs of autism include avoiding eye contact, lack of speech development, and difficulty with transitions.

Does My Child Have Autism?

A person with autism has problems talking, being friends, and changing. Doctors look at 3 things to diagnose autism: impaired communication, social interaction, and repetitive behavior patterns. If you have a child who doesn’t talk to people well or has many friends and does the same thing over and over again – they might have autism. But it is tough to tell if a child has autism or not without a doctor’s help because it can be hard to find out how bad the problems are by just looking at them.

Signs Of Autism In Children

Most people with autism show signs in early childhood, but sometimes it can be hard to diagnose until later on. There are many different signs that parents and doctors should look out for when trying to determine if a child has autism. These signs include- 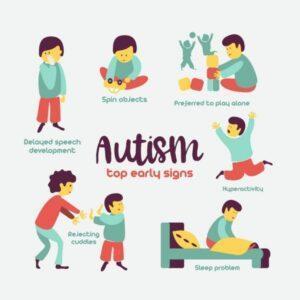 Some other common warning signs include repetitive behavior patterns and difficulty with transitions.

One of the clearest signs that a child may be on the autism spectrum is their lack of eye contact. According to Autism Speaks, children with ASD often avoid making eye contact or appear to look through rather than at an individual. This can make it difficult for them to take part in normal conversations and social interactions. Children with autism also tend to fixate on certain objects, such as toys or electronic devices, which limits their ability to pay attention during conversations.

According to Stanford Health Care, many people with ASD have trouble developing speech and language skills. They may be able to say a few words but not communicate properly using sentences. In addition, they will likely use an abnormal tone of voice or speak in a monotone voice. In many cases, children with ASD may not talk at all.

According to Autism Speaks, children on the autism spectrum have trouble learning how to play and engage in pretend play activities. This is because they often focus on a single object or activity instead of a bigger picture. Children with ASD also tend to engage in repetitive behavior patterns such as lining things up or flipping light switches on and off over and over again. They may be fascinated by specific items such as toys, electronic devices, or spinning objects.

According to Stanford Health Care, one of the clearest signs that a child may have autism is their lack of interest in engaging with others. In many cases, children with autism have a tough time interacting socially and may even avoid eye contact altogether. They may have trouble establishing friendships due to their lack of communication skills, which can lead to problems once they start school or attend playgroups with other children. According to the Centers for Disease Control and Prevention (CDC), some common warning signs of ASD include:

Transitions can be difficult for those who have Autism as well as their parents! We all know going from one activity at home to another activity…can be a challenge for everyone, but sometimes it can be a struggle for our kids with autism. We have compiled some tips and ideas to help make going from one activity to the next a bit easier! As always, we recommend speaking to your child’s doctor before starting anything new in their daily routine.

How Parents Can Spot Autism Signs In Children?

As a parent, you’re in the ideal position to detect the first signs of autism. You know your child better than anyone because you observe his or her behaviors and habits that a pediatrician in a fifteen-minute visit may not be able to notice. Although your child’s pediatrician can help, don’t underestimate the value of your own observations and experience. The goal is to learn so that you can identify what is typical and what isn’t.

including his current abilities and whether or not he is delayed in any way. The main windows of opportunity for early intervention are from birth to three years old, so if you suspect possible autism signs in a child, get him the help he needs as soon as possible.

Although all children develop at their own pace, there may be some concerning issues parents should look out for when they begin to notice the signs of autism in children. These include:

thinking your child “will outgrow it” because he will not. While some children are diagnosed with autism later in life, this doesn’t mean that early intervention wouldn’t have helped.

You will also want to be aware of the signs of autism in children before age three . If you notice any concerning behaviors or delays in development, call your doctor immediately for an evaluation.

The most important thing is to identify possible autism signs in your child’s first years so that interventions can begin as soon as possible. This will help prevent further difficulties down the road and make life easier for both you and your child.

Take action if you’re concerned that your child might have autism. He may not be able to tell you what’s wrong, so it’s up to you to try and determine whether or not he has early signs of autism.

If you think you see the signs of autism in children, call your doctor for an evaluation as soon as possible to help prevent further difficulties down the road and make life easier for both you and your child.

After reading this article, we can understand that parents should watch out for their children differently according to their age. If they suspect any abnormalities in their children, they should immediately contact a doctor. Parents need to regularly monitor their children ‘s development when they are in their early years. They also need to be aware of the most common symptoms of autism in children. If parents are worried about their child’s possible autism, they should take action as soon as possible to help children start receiving early treatments. 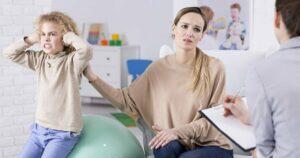 Autistic children face many challenges because of communication issues. Parents often ask “What are the communication skills of autistic children?” There are three areas that need to be addressed when communicating with your child or someone else’s autistic child. Spoken language is what most people think about first when asked this question. But the truth is much more complicated than that. We all use gestures, facial expressions, and written words to communicate, not just spoken words. People who cannot speak at all still have ways to express themselves. It’s through body language and hand signs like sign language. Facial expressions are another form of nonverbal communication. That is important to understand to help your child interact in different situations.

There are many challenges when communicating with autistic children. Autism is described as a spectrum disorder, meaning that the symptoms vary greatly from one person to another. Some people with autism cannot speak at all. While others have almost normal spoken language skills but may not understand what you say to them or may talk too much without taking turns well in a conversation. Many autistic people have trouble reading facial expressions or understanding the tone of voice.

People who have problems with social interaction usually have trouble interpreting the feelings and emotions of other people through their tone of voice, gestures, facial expressions and body language.

How Do Doctors Diagnose Autism signs in children? 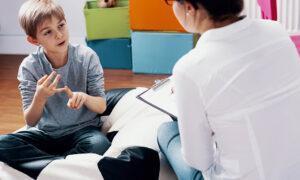 Doctors diagnose children with autism spectrum disorder by looking at 3 things: impaired communication, social interaction, and repetitive behavior patterns. All of these autism signs in children must occur at an early age for a doctor to determine if the child has ASD. If they don’t get diagnosed soon enough, there is less of a chance that they will be able to function normally in everyday life when they get older. Some warning signs that parents should look out for include lack of eye contact, poor social development, and lack of speech development in children under five years old. Another common sign in young kids is repetitive behavior patterns such as rocking back and forth or flapping their hands. Doctors can often tell if a child has autism without a parent’s help because it’s hard.

Autism spectrum disorder (ASD) is a term used to describe a range of symptoms associated with autism. The three main characteristics that doctors look for when diagnosing autism are impaired communication, social interaction, and repetitive behavior patterns. Some of the other common signs of autism include avoiding eye contact, lack of speech development, and transitions.

Parents and doctors can diagnose autism at a young age by looking for certain signs. Another important step parents can take is to consult their local school district about how they can set up early intervention programs. In order to get help with their child’s social skills and language development.

Parents should also talk to their child’s pediatrician about what steps can be taken. If they want more information on ASD services like speech therapy and occupational therapy. If you think your child might have autism spectrum disorder (ASD). It’s best not to ignore warning signs or hope they go away. Early diagnosis and treatment is the best way to ensure that your child will continue to grow and develop in a healthy way.

Some warning signs are-occurring actions or reactions that are not typical for other children the same age. If your child is doing anything repeatedly, or you notice them avoiding eye contact with people or other activities that should be enjoyed, it might be time to talk with their pediatrician.

Autism spectrum disorder (ASD) is a term used to describe a range of symptoms associated with autism. The three main characteristics that doctors look for when diagnosing autism are impaired communication, social interaction, and repetitive behavior patterns. Some of the other common signs of autism include avoiding eye contact, lack of speech development, and transitions. if you are looking for an article about autism signs, look no further here it is.