What Is Thought Blocking? 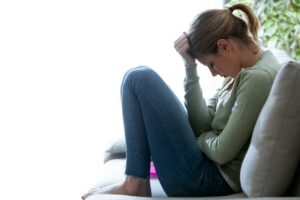 Thought blocking is a mental symptom found in schizophrenia. It is defined as the sudden interruption of thoughts or speech. Thought blocking can be accompanied by other symptoms such as auditory hallucinations and delusions.

Negative symptoms are reflective of an overall deficit in brain activity, where there is less activity in the prefrontal cortex and temporal lobe. This impairment in function also affects cognitive processes including memory formation, attention/working memory, speech production, speech comprehension, and social cognition. There may be a link to not only the brain but genetics as well.

Thought blocking is the main symptom found in schizophrenia, along with delusions and hallucinations. Thought blocking occurs when the individual experiences an interruption to the flow of their thoughts or speech, showing no continuity between words or sentences. This can be brought on by other negative symptoms such as lack of socialization, fear of interacting with others, and lack of motivation.

Thought blocking can be of three types: these are positive, irrelevant, and perseverative.

Positive thought blocking is when the person’s thoughts or speech interrupts with words similar to “I’ve got”. This type of interruption causes a short pause in the conversation after which the person continues on with their original thought or verb.

Irrelevant thought blocking is when a person’s speech interrupts words or sounds that have nothing to do with the current conversation. These types of interruptions cause a long pause in the conversation, sometimes uncomfortable for the other party who may question what caused it. 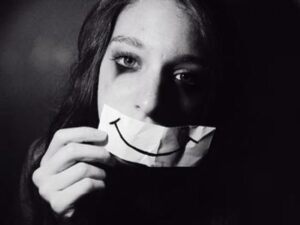 Perseverative thought blocking is when the person’s thoughts interrupt with words or sentences that are continuous. The speaker may not answer questions asked by others and will continuously talk over time about only one subject. People with schizophrenia who experience this type of symptom often have difficulty recalling recent events, relevant conversations, or the past.

Perseverative thought blocking is often accompanied by other negative symptoms such as poverty of speech, lack of volition, inability to maintain attention, and catatonic behavior.

There are no significant differences between men and women when it comes to the prevalence of this symptom. Studies also show that schizophrenia patients experience thought blocking more often than those who have bipolar disorder. Thought blocking is also possible in those with mood and anxiety disorders as well as intellectual disabilities and autism spectrum disorders. It is important to note that these symptoms do not mean that the person has schizophrenia. They can all occur in many other psychiatric and neurologic conditions.

Higher levels of cortisol in the brain can cause thought blocking to happen more often. It is also common for people who have schizophrenia to experience more thoughts that are irrelevant or perseverative because there is a deficit in brain activity. The brain wave test reveals that there is less brain activity in the frontal lobe which controls language and thinking skills.

The cause of thought blocking may also be due to abnormalities occurring in the thalamus, basal ganglia, temporal lobe, or corpus callosum. All of these regions are responsible for emotional expression and regulation as well as executive functioning, higher-level thinking, and speech production.

Psychosocial stressors such as the loss of a loved one, drug abuse, or poverty can lead to increased symptoms of thought blocking. The presence of low mood, anxiety, and psychosis can also cause a greater risk for developing thought blocking in people with schizophrenia.

Also known as “blocking,” this condition causes abrupt disruptions in a person’s train of thought, leaving moments of silence or gaps in conversation. 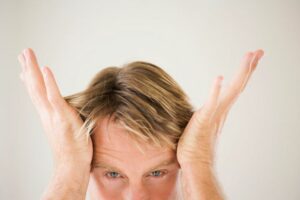 Thought blocking can cause an interruption to daily tasks and activities such as:

It may be worse during periods where the individual is alone or away from familiar surroundings. The person experiencing thought blocking may also appear unresponsive when spoken to directly by name or questioned about their thoughts or feelings.

There are a few different examples of thought blocking that can occur in people with schizophrenia. These include hallucinations, delusions, disorganized thinking, and thought blocking. Each of these symptoms can be very disruptive and interfere with daily life.

Hallucinations are sensory perceptions that occur in the absence of an external stimulus. They can be visual, auditory, olfactory, gustatory, or somatic. People with schizophrenia may experience all types of hallucinations or just one type.

Delusions are false beliefs that the person firmly holds and are not based on reality. People with schizophrenia may believe that someone is following or spying on them. That they have special powers or abilities, or that others are plotting against them.

It is common for people with schizophrenia to face disorganization in their thought processes. They may have trouble focusing or paying attention, and their train of thought may jump all over the place. There are several other factors that can influence this symptom as well, including mood and stress levels.

Thought blocking is the loss of train of thought or flow of conversation. This can be due to external distractions, internal distractions (such as auditory hallucinations), or the inability to process information quickly enough. While this may seem like a minor symptom. It can make communication with others very difficult and interfere with daily life activities.

Thoughts are blocked when a person has trouble processing the information they are receiving. Resulting in either brief blockage of their “speech stream” with pauses or breaks in talking, or words that trail off incomplete.

Is Thought Blocking A Side Effect Of Medication?

Thoughts being cut off is usually a sign of schizophrenia. Although it can also be a side effect of some medications.

Although the most common cause of it is schizophrenia and medication. But there are other potential reasons as well. These reasons may include an interruption in your train of thought or some kind of external distraction such as an interruption or a phone call.

Solution To These Issues

There are three possible solutions to this issue: identifying what topic is getting your attention during those moments of cutoff, finding some way to deal with the kind of interruption that occurs during those moments, and making changes to your medication dosage.

The first possible solution is to figure out why your train of thought is experiencing distraction during certain moments. If it happens too often in the course of a conversation. Then you may want to consider what topic of conversation might be causing the interruption.

You could think about something else for a while or take some time to re-orient yourself to the conversation, then try again. If you find that it happens a lot during one specific type of conversation or topic. Then you can approach that type of conversation differently by choosing another way to talk about it.

Another possible cause of thoughts being cut off mid-sentence is dealing with distractions. A phone call, a knock on the door, or any other type of distraction can cause you to lose your train of thought.

Is it’s possible to have somebody else handle that distraction for you without becoming too distracted themselves. Then this could solve your problem. If it’s not possible, then maybe you can schedule a specific place where no one will interrupt you for a while. Then you’ll know exactly when to expect that interruption. The final solution is to consider changes you could make in your medication dosage. 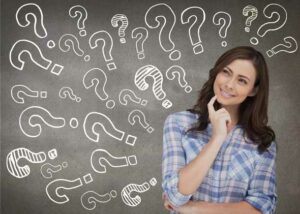 People who experience thought blocking should be under the care of a professional who can help determine whether or not it is schizophrenia that is causing the symptoms. If the person is then diagnosed with schizophrenia they will usually be started on antipsychotic medications which will reduce the intensity of the symptoms.

If the person experiences thought blocking more often than usual they may need to be hospitalized so that they can receive closer supervision for safety reasons.

And if the thought blocking is due to another psychiatric condition then treatment must focus on treating that condition rather than schizophrenia which means that antipsychotic medications won’t work as effectively.

Healthcare experts suggest a therapy in addition to the other treatments. It helps the person learn how to control their emotions and improve social skills.

Family therapy may also prove effective because it can help family members understand what is happening more clearly. So that they don’t dismiss it as just “crazy” behavior. Sometimes people mistakes thought blocking for “getting high” or other drugs/alcohol-related symptoms. So it is important that the person get help as soon as possible.

Cognitive-behavioral therapy can help to improve different types of negative symptoms in schizophrenia. Thought blocking treatment is also possible with antipsychotic medications such as clozapine which can reduce the intensity of these thoughts and interruptions.

ECT involves the use of electrical currents to induce seizures. ECT causes a brief, generalized seizure while the person is under anesthesia. Once it is over, there are no further effects on memory or alertness. And improvement starts usually soon after treatment begins. 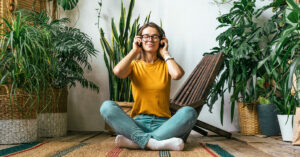 To decrease stress and anxiety thought blocking by practicing yoga, meditating, deep breathing exercises, and progressive muscle relaxation techniques are best. Doing these things on a daily basis can reduce the frequency of these symptoms substantially. While increasing one’s mood and well-being.

While thought blocking may seem unusual or inconvenient. It is important to remember that there are ways to manage the condition so that life can go on as usual. A medical professional discusses treatment options before implementing any of them.

Support groups can help others cope with thought blocking by sharing experiences and coping strategies with each other. The person will also have the chance to meet people who are experiencing similar symptoms which may lead to greater self-awareness.

A mental health professional handles the treatment for thoughts obstruction.

There are multiple treatments for thoughts obstruction, including support groups and therapy. Support groups can help others cope with thoughts obstruction by sharing experiences and coping strategies with each other. Meeting people who are experiencing similar symptoms may also lead to greater self-awareness of the condition for the person experiencing thought obstruction. Healthcare experts suggest therapy often in addition to medication. Because therapy can help the person learn to control their emotions and improve social skills. That will prove useful when coping with the condition.