Dopamine is a neurotransmitter that has many functions in the brain. It’s what makes you feel good and motivated. There are, however, some symptoms of dopamine deficiency. These are such as depression or lack of motivation. This can be difficult to diagnose without medical help. 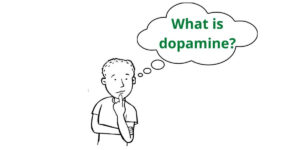 Dopamine is a neurotransmitter that helps control the brain’s reward and pleasure centers. It also involves movement, attention, learning, and memory. This means that dopamine is responsible for things like motivation, productivity, and focus.

Dopamine is made from the amino acid tyrosine. It is synthesized in the brain’s substantia nigra and ventral tegmental area.

The dopamine transporter moves dopamine between nerve cells. Their receptors are found on the surface of cells throughout the brain. When dopamine attaches to a receptor, it activates the cell, influencing how it behaves.

Dopamine is produced when our needs are met. For example, dopamine is released when we get the food that we were hungry for or if our basic need of shelter is met. When you eat your favorite snack after a long day at work or drink coffee in the morning to fight off fatigue, these behaviors activate dopamine release and bring on feelings of happiness and motivation.

There are many functions of dopamine in the brain. Dopamine is responsible for things like motivation, productivity, and focus.

Dopamine affects the brain’s reward and pleasure pathways, making us feel good. It can also influence moods such as depression or anxiety.

Dopamine has an effect on decision-making processes by regulating impulse control and attention levels in humans. When dopamine is low, you might experience a lack of motivation to get things done or focus for extended periods of time which could lead to procrastination.

Dopamine affects your sleeping patterns. These effects might be due to dopamine’s role in the movement. For example, people with Parkinson’s disease often have disrupted sleep patterns.

Dopamine is also linked to sexual arousal and motivation. It has been found that when someone is sexually aroused, the brain releases dopamine in the same way it does when we experience other rewards like food or money.

What Is Dopamine Deficiency?

Dopamine deficiency is when the levels of dopamine in your brain are lower than normal. Certain diseases, medications can cause this deficiency. When you have low dopamine levels, it can cause a wide range of symptoms that affect how you feel overall. For example, dopamine deficiency might make it difficult for you to do anything or get motivated. On the other hand, an excess in dopamine could result in feelings of euphoria but may also lead to compulsive behavior like gambling addiction.

There are some symptoms of dopamine deficiency such as depression or lack of motivation which can be difficult to diagnose without medical help. If you feel like you may be experiencing any of these symptoms, please consult a doctor for further evaluation and treatment options.

People with low levels of dopamine are more likely to suffer from depression. Dopamine can be a powerful antidepressant and anti-anxiety agent due to its effects on mood.

A lack of motivation is another common symptom of this deficiency. This makes it hard for people who feel this way to do things in life. These activities are such as going out, meeting up with friends, or even making plans at all. This is because they just don’t have the desire to do so. It’s easy for these individuals to become socially withdrawn and isolated from others which only worsens their condition over time since socializing stimulates its production.

People with low levels of dopamine often report that they find it difficult to concentrate on one task.

Lack Of Focus And Concentration

People who have low dopamine levels often complain about a lack of focus and concentration. They may find it difficult to follow conversations or remember things. It might feel almost impossible for them to stay on task when trying to complete a project at work, study for an exam, or even read a book from start to finish.

Since dopamine is involved in our sleeping patterns as mentioned earlier, people with lower than normal levels of this neurotransmitter are more likely to experience insomnia since they don’t get enough restorative sleep each night which contributes to fatigue the following day. This can lead them down the path toward developing other conditions such as depression that only further disrupt their ability to function optimally.

There are many causes of dopamine deficiency including:

These levels naturally drop as you age. This can lead to deficiency for some people, which may make it harder to get motivated or want to do things in general. This cause of dopamine deficiency can be a natural part of aging.

Several diseases and conditions affect the levels in your brain, including Parkinson’s disease, multiple sclerosis (MS), restless leg syndrome (RLS), schizophrenia, bipolar disorder, overactive thyroid gland (hyperthyroidism), and more. In some cases, these conditions are genetic. This means that family members pass this through their genes. If you have a parent with one of these diseases there is at least an increased risk for you to develop it as well.

Taking drugs like cocaine or methamphetamine may also lead to low levels since they cause neurons involved in creating dopamine to release less often than normal while substance abuse leads them to stop working altogether. Alcohol abuse can also affect dopamine levels since it increases the activity in your brain’s reward center which releases more of this neurotransmitter.

Medication side effects are a common cause of dopamine deficiency. For example, certain antidepressants like Prozac (fluoxetine) and Zoloft (sertraline) can lower these levels. Other medications that may have this side effect include antipsychotics, anti-nausea drugs, Parkinson’s disease medications, and some diabetes medications.

This is another common cause of dopamine deficiency. When you smoke, nicotine binds to receptors in the brain that release it. This “high” then becomes addictive and smokers crave it regularly, needing more and more nicotine to get the same effect. As a result, smokers often have these low levels in their brains.

How Is Dopamine Deficiency Diagnosed?

If you think you might be experiencing symptoms of dopamine deficiency, it’s important to talk to your doctor about it. Your doctor will likely do a physical exam and order some tests to check your dopamine levels.

The other alternative to diagnose is through a mental health professional. They can help you recognize some of the deficiency symptoms and check your levels as well if needed.

If you have these low levels, there are several ways that may increase it in your brain naturally including:

Getting your body moving is one way to boost those feel-good neurotransmitters like serotonin and dopamine. Exercise seems to affect these chemicals just like antidepressant medications do which means working out regularly may improve depression symptoms too. A study found that people who exercised at least 30 minutes per day experienced less severe depression than others who didn’t get any physical activity during their free time. Another 19 percent reduction in depression was seen when participants engaged in an exercise that was deemed “vigorous” like running or aerobics.

Research shows that meditation may increase the levels of it in your brain by up to 65 percent, which can improve mood and motivation while also decreasing stress. Meditation affects these neurotransmitters just like antidepressants do. That is why it’s possible this activity helps treat depression symptoms too. For best results, try practicing mindfulness meditation daily for at least 30 minutes each day. You don’t have to meditate long though – even short sessions (even as little as two or three minutes) throughout the day. This could help you feel better overall. It is because they reduce stress hormones. These cause anxiety and boost serotonin levels in some cases.

Besides exercise, some foods may also help increase these levels naturally, including:

Legumes like kidney beans and lentils have L-dopa which boosts it. Other sources of this amino acid include poultry, fish, tofu, oats, spinach, and bananas. Note that cooking these ingredients can affect how much of the amino acids your body actually absorbs so be sure to eat them in their natural state whenever possible.

Staying hydrated is important for various reasons but it could have a big effect on serotonin and dopamine as well since they’re both chemicals found inside brain cells where the water goes too when you drink enough of it each day. According to one study drinking, about two liters (or eight cups) per day increased dopamine levels by 15 percent.

All kinds of berries are beneficial for your brain health, but especially strawberries and blueberries which contain antioxidants that can protect the cells in your brain from damage. In fact, according to one study eating about a half cup of these per day led to increased feelings of pleasure and decreased anxiety symptoms.

Chocolate is another food that’s good for your mental health because it contains compounds called polyphenols which have anti-inflammatory effects on the brain. Plus, dark chocolate (the kind with at least 70 percent cocoa) increases levels of both of these chemicals. So go ahead and indulge in a small piece each day if you want, but be sure it’s dark chocolate since the sugar and fat in milk chocolates can actually decrease your brain health instead.

What Is Dopamine Detox?

Dopamine detox is a process that helps rid the body of excess dopamine. Dopamine is a neurotransmitter that plays a role in movement, motivation, pleasure, and addiction. Too much dopamine can lead to problems such as tremors, anxiety, and paranoia. Dopamine detox is often used as a treatment for schizophrenia.

In some cases, too much dopamine can lead to psychotic symptoms such as delusions, hallucinations, and paranoia. In the case of schizophrenia, excessive dopamine is typically caused by overactive mesolimbic dopaminergic pathways.

Dopamine is a neurotransmitter that sends signals to the brain. When this chemical is released, it drives us to take action or complete tasks in order for that feeling of pleasure and reward.