Given the popularity of the concept of introjection among psychologists, it can be difficult to find an article about introjections without reading about how it affects personalities. Or if there are any treatments for negative introjections. Here are some introductory facts you should know before diving deeper into this complex process! 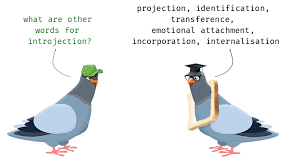 Introjection is “the process of taking in an external object or quality and incorporating it into the self.” In other words, introjection is when someone takes in thoughts, impulses, or emotions from other people and incorporates them into their personality.

Concept Of Self In Psychology

The concept of self in psychology is complex. It has been studied for many years, and there are still many unanswered questions about it. The definition of self can be described as “the totality of an individual’s thoughts, feelings, and behavior.” In other words, the self refers to everything that makes up a person’s personality- their thoughts, feelings, and actions.

Who Gave The Concept Of Introjection? 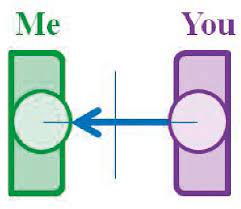 The concept of introjection was first introduced by Sigmund Freud. He was a psychoanalyst who developed the theory of psychoanalysis. Psychoanalysis is the theory that unconscious thoughts and feelings affect people’s behavior. Freud believed that people use defense mechanisms to protect themselves from uncomfortable or threatening thoughts. Defense mechanisms are conscious and unconscious behaviors that protect the ego from anxiety, social problems, etc.

Who Are The Main Players In Psychoanalysis?

The three main players in psychoanalysis are Id (the primal instinct), Ego (reality-testing force of personality), and Super-ego (conscience). They all work together in a dynamic balance that helps keep the mind healthy. In a nutshell, Freud believed that all psychological disorders were caused by unresolved conflicts between the id, ego, and superego.

Freud believed that when these three parts of the mental conflict, can cause psychological disorders. One way that this conflict could manifest itself was through introjection. Introjection is when people incorporate parts of the outside world into their personalities.

For example, if someone’s best friend was an introvert and they wanted to see what it felt like being an introvert too. Then they would try incorporating those personality traits (shyness and anxiety) into themselves as a way of resolving conflict between the id and superego.

NOTE: Since the psychoanalyst, Sigmund Freud first coined the term introjection, other psychologists have expanded on his initial ideas to create a better understanding of this concept. However, there are still some discrepancies between what professionals think about introjections and how they affect people’s personalities. 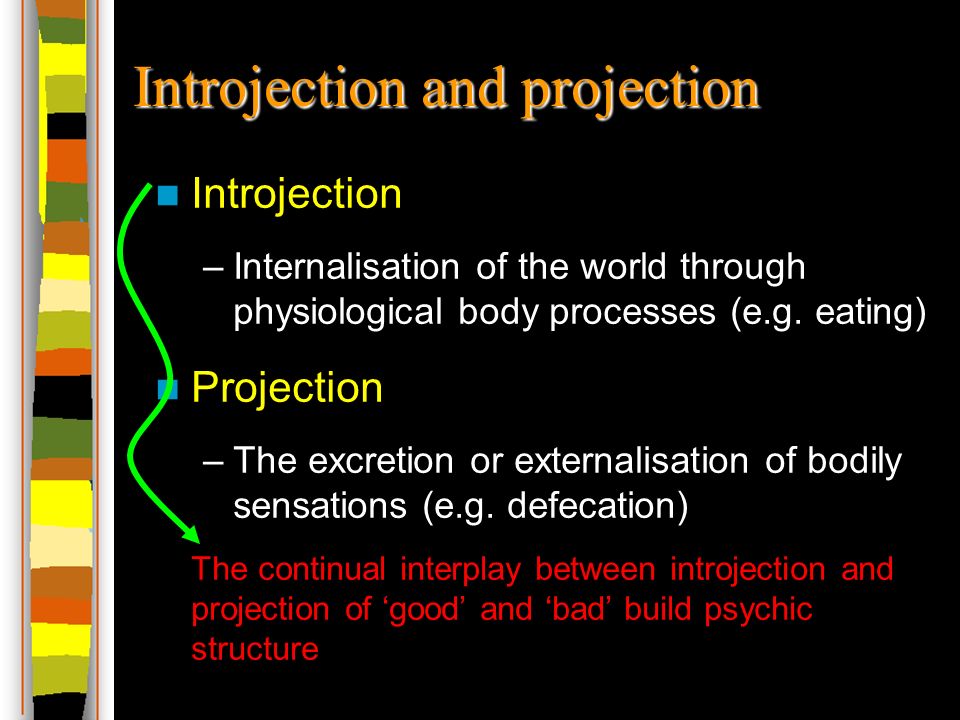 There are three types of introjections that people can incorporate into their personalities, each one more complex than the last.

The first type is mild introjection which happens when someone takes on others’ thoughts and feelings without changing who they inherently are as a person. For example, if you had a friend who was always optimistic and happy, you may start to feel more cheerful around them even if your disposition is normally quite pessimistic.

The second type of introjection is called incorporation. Incorporation happens when people take on others’ thoughts and feelings and change their behavior as a result. So in the example above, if you started incorporating your friend’s optimistic attitude into your own life. For example, smiling more and being less critical of yourself, then you would be practicing incorporation.

The third and final type of introjection is assimilation. Assimilation happens when people take on others’ thoughts and feelings and change their entire personalities as a result. So in the example above, if you started to practice assimilation and became an optimistic person yourself. Then your old personality would be completely replaced by this new one. 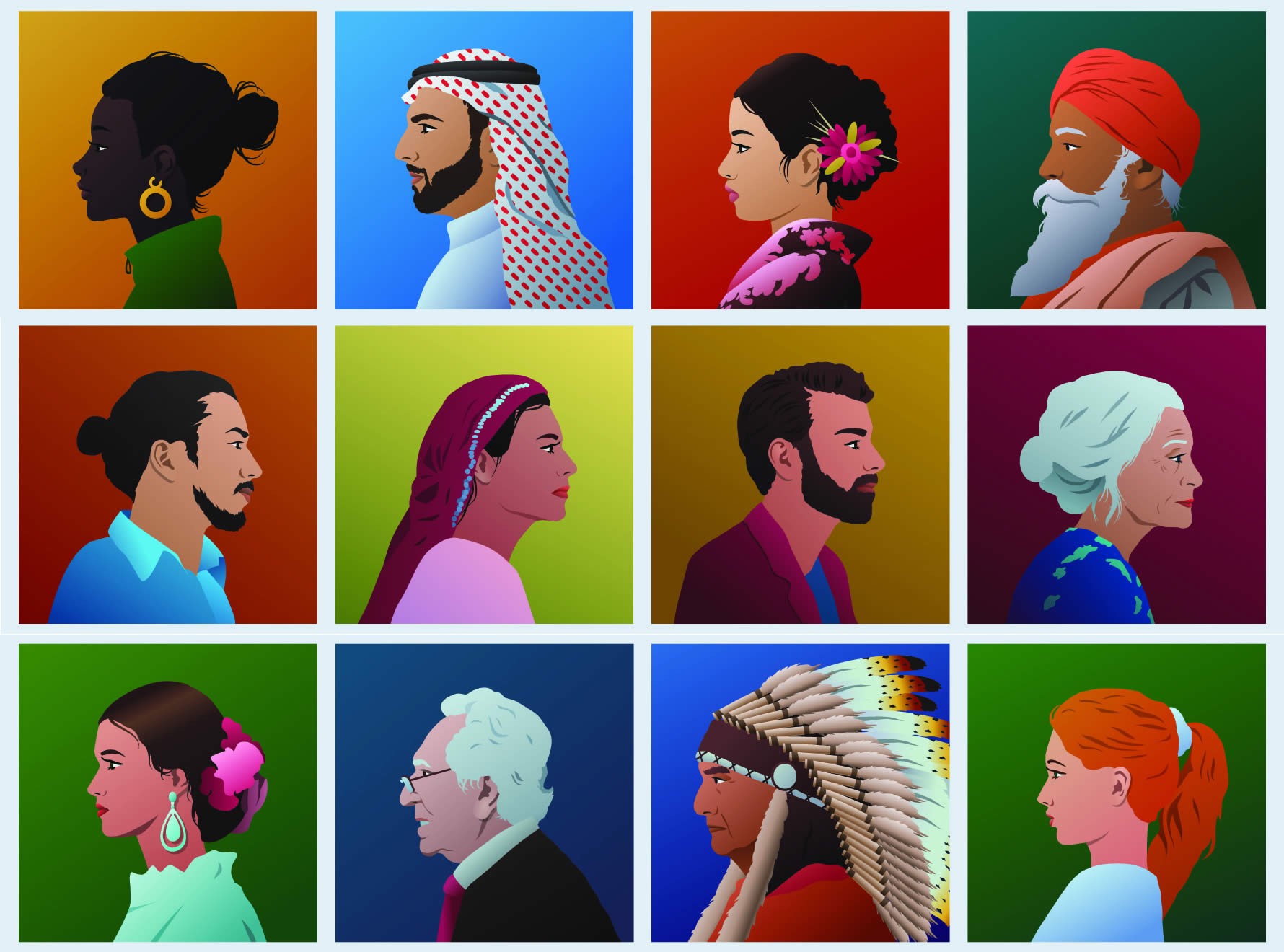 How The Environment Affects Introjection? 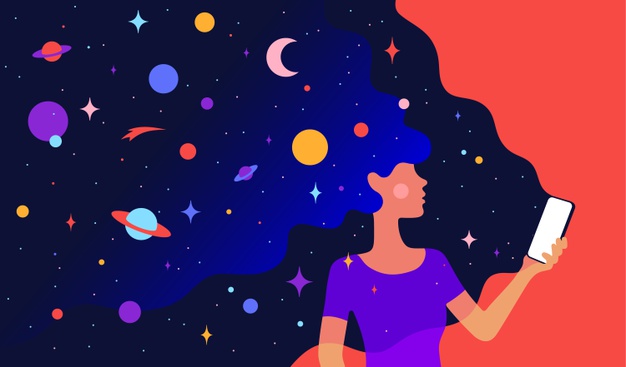 The environment can also have a big impact on whether someone introjects or not.

Superheroes, like Superman and Spiderman, are often very kind and friendly with everyone around them. Their stories can have a big impact on how people perceive introjection. Because the audience members may unconsciously incorporate these superheroes’ qualities into their personalities. Rather than just identifying with them as characters in movies or books.

How Books And Movies Influence Introjection?

Books and movies can both have a big impact on introjection. For example, if you read about or watch someone very kind and generous in books or movies. Then you may start to feel warmer and giving yourself after reading/watching these stories than before. This could be either because you’ve taken on the qualities of this character in the story. Or that you’ve incorporated them into your sense of self.

What Is The Role Of Introjection In Upbringing Of Children? 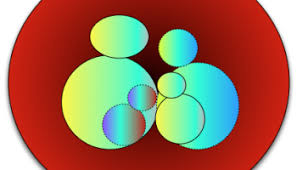 Introjection is an important part of a child’s upbringing. They learn how to imitate the qualities of the people around them. It helps them form their own identity as they grow up. This imitation can be either through introjection or assimilation.

Introjection And Its Effects

Positive Introjection And Its Effects

Introjecting positive qualities is very beneficial for people’s sense of well-being and happiness in life. Because it helps them to feel better about themselves. It is like the more secure with who they are, and less isolated from the world around them. This can also help them to function better in society by allowing them to be more open and warm with other people.

Example: If someone introjects the qualities of being kind and friendly from a friend. Then they may become more open and trusting with other people. This could lead to them having more meaningful relationships with others and feeling happier in their social life. 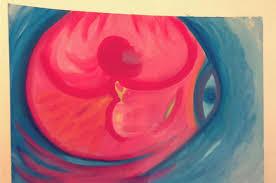 Unfortunately, introjecting positive qualities can also cause problems when it becomes extreme or out of control. Some possible negative effects that may arise from this include:

Example: If someone introjects the qualities of being strong from a superhero. Then they may become more aggressive and domineering with others. This could lead to them having difficulty maintaining healthy relationships with other people and feeling unhappy in their social life.

Introjection As A Defense Mechanism 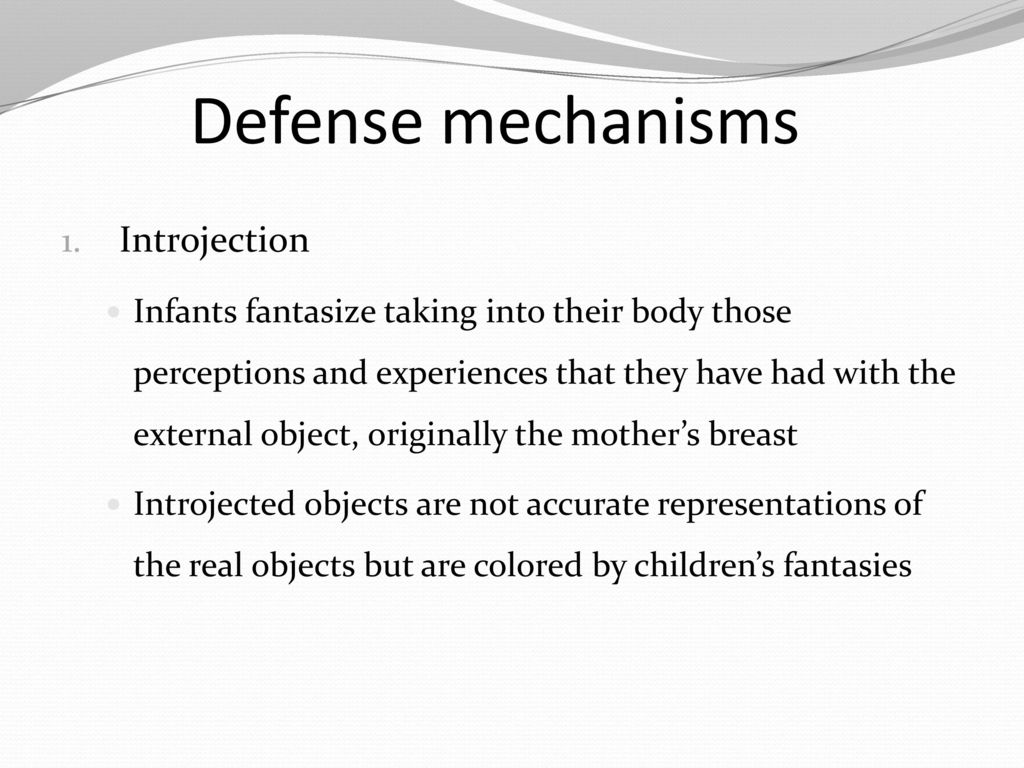 Introjection can be a helpful or harmful defense mechanism, depending on the person’s circumstances. Some of the conditions that might lead to someone introjecting qualities from others into themselves are:

It is important to note that introjection can be a positive thing if it provides the person with qualities they lack and need to make themselves better people or improve their lives. This can happen when someone has very low self-esteem or a lot of insecurity within themselves.

Also, people will use introjection as a defense mechanism when they feel threatened by certain parts of themselves or other people. For example, you may introject qualities that are seen as negative to protect yourself from experiencing these feelings within your personality. Here, the quality you’ve taken on from another person might not be a quality that’s good for you, and it could make your life worse.

NOTE: Introjection can also cause problems if the person is trying to get over something in their past. Such as an abusive relationship or some type of trauma they went through. If they try to take on qualities from other people who are not associated with what happened to them, they might get stuck in their past rather than moving on from it.

If someone is suffering from negative introjection, there are a few different types of therapy they can try to help them heal and move past the problematic behavior.

Both of these therapies can be very helpful in identifying and working through the issues that are causing someone to introject negative qualities into their sense of self.

Talking To a Professional

People who are struggling with introjection can also turn to therapists, psychologists, counselors, psychiatrists, or other mental health professionals for help.

Professionals may be able to offer the person some guidance and understanding about what is causing them distress in their lives. They might be able to provide insight into how another person’s qualities became part of your sense of self.

They can also help the person to learn more about introjection, how it impacts your life, and what you could do to get better. More importantly, they may be able to provide support for someone who is struggling with moving forward from this type of defense mechanism into a healthier way of coping with their feelings.

If you’re experiencing negative introjections, then there are a few things that you can do to help yourself with this problem.

Example: Introjection as a defense mechanism is often used by people who have narcissistic traits. Such as being manipulative and overly controlling towards others to make up for the fact that they don’t feel good about themselves on the inside.

Introjection is a process that is often talked about by professionals. But there is still some disagreement about what it entails. There are a few different views on introjection, with some professionals believing that it’s simply the act of incorporating another person’s qualities into your sense of self. Others believe that introjection is more complex than that and instead involves a person unconsciously internalizing other people’s feelings and emotions to protect themselves from their difficult feelings.

There are a few possible benefits to introjection. For example, it can be a normal part of the process people go through when they’re trying to form their own identity as children or teenagers. It’s also an important way that people learn about themselves and what makes them different from other people. Finally, introjection may play a role in certain types of creativity because it allows people to access different parts of their personality that they wouldn’t normally use.

There are also a few possible negative effects of introjection. For example, if someone introjects qualities from other people that aren’t positive or healthy, then it can lead to problems like mental health issues. It can also lead to problems if someone introjects negative qualities from other people that they’re not able to cope with on their own, which could cause them to try and avoid these uncomfortable feelings by projecting the same negative qualities onto others around them instead of dealing with them themselves.

Introjection is a complex psychological process that can have both positive and negative effects on a person’s life. It’s important to be aware of what introjection is and how it might be affecting you. So that you can work towards having a healthier sense of self. Therefore, it is important to be aware of the factors that might lead to introjection, as well as the possible outcomes of this defensive behavior.

If you are struggling with negative introjection, it is advised to seek professional help to understand and address the underlying issues. With time and effort, it is possible to overcome the negative effects of introjection and live a happier, healthier life.