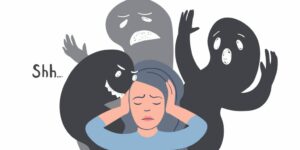 Schizophrenia is a mental disorder characterized by abnormal social behavior and failure to understand reality. It can lead to hallucinations, delusions, and disorganized speech and thinking. Schizophrenia usually develops in late adolescence or early adulthood and affects about 0.3% of the population worldwide. The condition has been known for centuries but was not well understood until the mid-1900s when antipsychotic drugs were developed that could improve its symptoms without causing serious side effects.

Cause Of Hallucinations In Schizophrenia 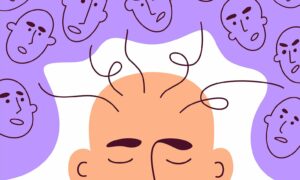 There are many theories on what causes schizophrenia and its symptoms, but most research has found that it is caused by an interaction between genetic and environmental factors. There has been debate about which plays a stronger role in causing the disease, but currently, they seem to be working together to create the different symptoms.

Many drugs are used to treat schizophrenia and its hallucinations. Some common treatments are antipsychotic medications, anti-anxiety medications, antidepressants, mood stabilizers, anticonvulsants, and others that may be prescribed by your doctor. Of course, there are many other ways to help manage or cope with the disease like therapy, self-help groups, and more.

Hallucinations are a common symptom of schizophrenia, but they can also be seen in other mental illnesses. If you or someone you know is experiencing hallucinations, it is important to seek professional help. There are many different treatments available that can help lessen the symptoms and improve the quality of life.

Types Of Hallucinations In Schizophrenia 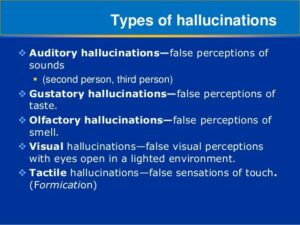 Auditory Hallucinations– this type of hallucination is the most common. Hearing things that other people don’t hear can be very frightening and confusing for a person with schizophrenia. The voices can give orders, force someone to harm themselves, and tell them what to do. Auditory hallucinations usually sound like regular speech or arguing – just louder than they would be in real life.

Visual Hallucinations– this type of hallucination can be very scary for a person with schizophrenia. They may see things that aren’t there – like spiders, insects, people out to hurt them, or blood on the walls. Seeing these things can make someone extremely paranoid and cause fear.

Olfactory Hallucinations– this type of hallucination is the least common. A person with schizophrenia may smell things that aren’t there – like smoke, feces, or vomit.

Gustatory Hallucinations– this type of hallucination is the least common. It involves a person tasting something that isn’t there – like dirt or metal in their mouth.

Somatic Hallucinations– this type of hallucination is the least common. It involves feeling something that isn’t there – like bugs crawling on their skin or a tight band around their chest.

How Hallucinations Affects Person with Schizophrenia? 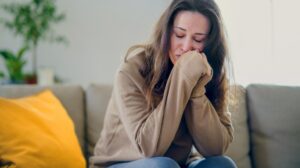 Hallucinations are a common symptom of schizophrenia. They can occur in any of the five senses and can be either visual, auditory, olfactory, gustatory, or tactile.

People who experience hallucinations as a symptom of schizophrenia can see, hear, smell, taste, or feel things that are not actually there.

Not everyone with schizophrenia experiences hallucinations. Studies show that around 70-80% of people with the illness will experience them in some way. For some, they might be infrequent and unimportant, but for others, they can be daily and debilitating.

Helping Someone With Schizophrenic Hallucinations

Dealing with schizophrenia is not an easy task. If your loved ones are going through such a disorder, Then here are a few tips that you can use to help them.

The first thing you should do if someone you know is hearing voices or seeing things that aren’t there is to make sure they are safe. If they are in any immediate danger, get them some help and call 911. It is also important to make sure they are in a safe place and can call their doctor for more direction on what to do next. Sometimes, hallucinations can be so strong and frightening that the sufferer does not want to talk about it with anyone. In these cases, they may isolate themselves from friends and family because they do not feel safe when talking with others. Be understanding of this and help your friend find a safe space to talk about what they are going through.

The most effective way you can help someone who is experiencing hallucinations is to listen and let them talk about it without judgment or interrupting. This may be difficult because the person will likely experience mood swings, hostility toward you, and paranoia. Be patient with them- they are struggling with something that is difficult to understand for people who do not have the disorder.

Help your friend or family member find resources available to them if they need someone to talk to. Many mental health facilities offer counseling services free of charge for those who cannot afford it.

Encourage Them To Seek Professional Help

It is important that the person suffering from schizophrenia seeks help immediately before their situation worsens. Hallucinations can be treated with counseling and medication. They must go for treatment of some kind as soon as possible.

A person can recover from schizophrenia and lead a fulfilling life. If they get the right treatment, the hallucinations will stop and they will be able to live a normal life once again.

Schizophrenia is a brain disorder that causes people to see or hear things that do not exist, speak illogically, or form false beliefs.

If you know someone who is experiencing hallucinations as a result of their schizophrenia, it’s important to stay calm and supportive. Try not to engage with what they’re seeing or hearing. Ask them what is happening and talk calmly. Refrain from arguing with the person as it won’t help anything. Let them know that it’s okay if they don’t believe you – but try to convince them that there isn’t really anything there. This is a common symptom of schizophrenia, so try to be understanding.

If the person is agitated or hostile, you may need to call for help. The hallucinations can be extremely frightening and cause a person to become violent or suicidal. If this is the case, stay safe and wait for help to arrive. 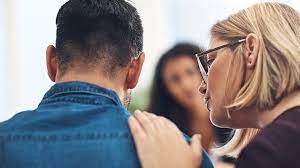 These are the tips for helping someone with hallucinations-

If you are a friend or family member of someone who is living with schizophrenia, then it can be difficult to know where to find help. The best place to start is with the person’s doctor. They will be able to provide you with information on local mental health facilities, support groups, and counseling services.

Hallucinations are a common symptom of schizophrenia and can be extremely distressing for the person experiencing them. There are a number of treatments available for hallucinations, including medication and therapy.

There are a number of different types of therapy available for people with schizophrenia, including cognitive-behavioral therapy (CBT), family-focused therapy, and social skills training. However, CBT is the most common type of therapy and helps the person to identify and change the beliefs and behaviors that contribute to their hallucinations.

Family-focused therapy also helps the family to understand and support the person with schizophrenia. It also teaches the family how to cope with the disorder. And social skills training helps the person to learn how to interact with others in a positive way.

There are a number of different medications available for treating hallucinations. But doctors usually prescribe antipsychotic medication or anti-depressants, which both help to control hallucinations.

People with schizophrenia should never stop taking their medication without speaking to their doctor first. Stopping the medication suddenly can cause psychotic symptoms to return, so it’s important for the person with schizophrenia to keep taking any prescribed drugs even if they are feeling better.

Schizophrenia is a severe mental disorder that affects the brain’s ability to interpret reality. It can cause hallucinations, delusions, and disorganized speech or behavior. Although schizophrenia usually starts in late adolescence or early adulthood. But it sometimes begins earlier in childhood or later in life—and tends to have episodic periods with remissions between them. So if you or your loved one is experiencing symptoms of schizophrenia, then you will want to seek professional help. The disorder is treatable with medications and psychosocial therapies as well in many cases.