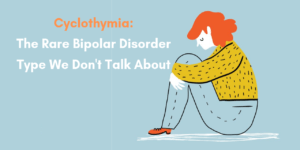 Cyclothymia is a mental health disorder that is characterized by mood swings that range from mild to severe. These mood swings can occur over the course of days, weeks, or even months and can interfere with a person’s ability to function normally in everyday life. Cyclothymia is a relatively rare disorder, affecting about 1% of the population. It is more common in women than in men and typically begins during adolescence or early adulthood.

A disorder characterized by numerous periods of hypomanic symptoms and periods with depressive symptoms that do not meet the full criteria for major depression. This disorder is sometimes considered to be a “sub-threshold” condition, meaning that it lies on the borderline between two diagnoses. It may also be called cyclothymic disorder or cyclothymia, although the term “cyclothymic” has been criticized because it implies a connection with the cyclothymic temperament, which is not always present in people with this disorder.

The signs and symptoms of cyclothymia are similar to those of bipolar disorder (I or II), but they are less intense and the periods of highs (or manias) and lows (or depressions) are not as distinct. As with bipolar disorder, there is a wide range in the intensity of symptoms among people with cyclothymia. Some people have only short periods of hypomania or mild depression, which hardly affect their daily activities at all. Others have more severe symptoms that can cause problems in school, at work, and in relationships with family and friends.

Signs And Symptoms Of Cyclothymia

The primary sign of cyclothymia is that a person experiences alternating periods of hypomanic (mildly manic) and depressive (mildly depressed) symptoms for many years. The periods of depression and mania do not meet the full criteria for major mood episodes. Those are part of bipolar I disorder.

The symptoms of cyclothymia may include some or all of these:

• Rapid cycling – alternating between periods of hypomania and depression on a daily or weekly basis. It can also be less frequent, such as once every few months.

• Mildly elevated or irritable mood (hypomania) – The person may appear to be very “up” and optimistic, but it is a less intense version of mania. He or she will not have the same problems with sleep that people with classic mania often do.

The primary symptom of cyclothymia is a series of mood swings that range from mild depression to manic episodes. These mood swings may last for days or weeks at a time. And they can have an impact on an individual’s ability to perform normal daily activities. People with this disorder typically experience either signs of depression (including sadness, lack of interest in things that were once enjoyed, or changes in appetite. Or symptoms associated with mania (including excessive physical movement and speech as well as feelings of euphoria).

Is Having Depression Mean Having Cyclothymia? 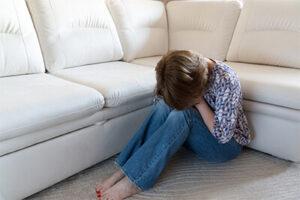 The Diagnostic and Statistical Manual of Mental Disorders, 4th Edition

(DSM-IV), lists a diagnosis of cyclothymic disorder as appropriate when an individual fulfills the following criteria:

Type I: The person experiences alternating periods of hypomania and depression that last at least a week or more.

Type II: The person experiences much milder mood swings – from normal to mildly depressed – with no episodes lasting more than a day.

There is also a “not otherwise specified” category, which includes people who have symptoms of hypomania but do not meet the full criteria for a diagnosis of cyclothymia.

The exact cause of cyclothymia is not known. It is believed that biological and environmental factors may play a role in the development of this disorder.

These indicate a higher probability of the condition’s development. Twin studies show that having an identical twin with cyclothymia raises the chance of developing it by 2-3 times, suggesting the important genetic component of the disease.

To be diagnosed with cyclothymia, a person must meet criteria outlined in either one of two mental health manuals: the Diagnostic and Statistical Manual (DSM) or the International Classification of Diseases (ICD). In order to be diagnosed with this disorder, an individual must experience at least two years of mood swings that meet certain criteria.

The DSM-IV diagnostic criteria state that a person has cyclothymia if they have experienced cycling mood changes (mania and depression) for more than two years, but not as long as the periods of mania and depression last (at least two weeks). The DSM breaks down the criteria for diagnosis even further:

• The individual must have experienced a period of elevated mood (mania) that lasts at least one week. For people with this disorder, this is usually characterized by feelings of happiness or irritability as well as increased activity or physical restlessness. During this time, the individual may not need or want as much sleep as normal.

• The individual must experience mild depression after the elevated mood comes down. This usually lasts two to three days but no longer than two weeks. Symptoms typically include sadness, fatigue, and changes in appetite.

• The length of the elevated mood and mild depression is at least two weeks but less than two years.

One of the most important criteria for a diagnosis of cyclothymia is that the depression state must interfere with social, occupational. Or other important areas of functioning in order to get a proper diagnosis. In addition, these mood swings must not be the result of drugs or other substances, or by a medical condition. 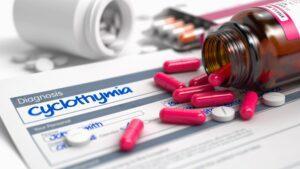 As with many mental disorders, treatment for cyclothymia typically involves a combination of medication and talk therapy. In addition to specific treatments associated with each mood state (i.e., mania and depression), there are certain lifestyle changes that can help to reduce the severity of these mood swings.

A combination of medication can help to control the severity of mood swings. It is not known why, but the medications typically help treat the major depressive disorder are less effective for people with cyclothymia. These drugs may even make symptoms worse. Like many mental disorders, bipolar mood disorder has become associated with certain drugs. They are particularly effective at treating symptoms of this disease. Mood stabilizers and atypical antipsychotics are typically for people with cyclothymia.

In addition to medications, psychotherapy or “talk therapy” can help individuals reduce the severity of mood swings over time. In particular, cognitive behavioral therapy has been shown to be very helpful in teaching individuals how to identify mood shifts as they happen and how to respond to them. Additionally, this type of therapy helps people recognize what triggers these mood swings and develop coping strategies that can help reduce the likelihood of future episodes.

Getting enough sleep at night

People with this disorder typically have a harder time falling and staying asleep than normal. So it is important to maintain a regular sleep schedule in order to help improve mood stability throughout the day. In addition, it is often helpful to reduce or avoid caffeine and other stimulants before bedtime.

Eating a healthy diet rich in essential vitamins and minerals. Although there is no specific diet that associates with improving symptoms of this disorder. It is important to maintain proper nutrition in order to help the body function at its best. A healthy diet can also help manage any additional symptoms associated with common co-occurring disorders (such as anxiety, depression, and bipolar disorder).

Decreasing stress levels through various forms of relaxation. Stress can worsen or trigger both elevated and depressed moods. Relaxation techniques may include meditation, mindfulness, yoga, tai chi, or breathing exercises in order to help an individual deal with stress more effectively.

Exercising on a regular basis in order to help manage both elevated and depressed moods. Exercise helps release endorphins—chemicals in the brain that improve mood—and decrease anxiety levels. However, it is important to avoid vigorous exercise just before bedtime. Since this can have the opposite effect and make it harder to fall asleep at night.

This means listening to others with full attention, expressing thoughts and feelings without judgment, refusing to engage in arguments or fights, maintaining eye contact during conversations with others, and speaking in a calm tone of voice. These communication skills can help reduce stress and improve relationships.

Developing a support network of family and friends who understand the disorder and will be supportive, encouraging, and honest with their feedback. It is helpful to have people around who can provide an objective perspective on situations and help identify when moods begin to change. So proper treatment is easy to implement. Having a solid support system in place can also help avoid the development of co-occurring disorders.

In full remission, and many individuals no longer require medication to maintain stability. There are some cases where treatment is necessary for the remainder of one’s life (i.e., if symptoms worsen with age or other health conditions develop).

This disorder is relatively rare, with a prevalence rate of 0.4% in the U.S. population as a whole. And 1-2% among those diagnosed with bipolar disorder (this means that roughly 200 out of 100,000 people will meet the criteria for cyclothymia).

Diagnosis can be difficult because it is rare for people with this disorder to seek treatment by themselves. In fact, people often visit their doctor complaining of depression when in fact they have been experiencing mild hypomanic symptoms. That the person or the people around him/them do not notice. Also, cyclothymia can be difficult to diagnose because the periods of hypomania and mild depression are not as intense as in bipolar disorder. So they may or be attributed to other causes.

Cyclothymia is often misdiagnosed for two reasons. The first is that cyclothymic symptoms can mimic those of another disorder (e.g., clinical depression). The second is that people with cyclothymia often do not seek help for their symptoms, due to the mildness of the condition. Thus, it can go undiagnosed and untreated for years.

The NIMH estimates up to 2 percent of the population may have cyclothymia. Because it is a relatively new diagnosis. There are no precise statistics on the number of people in the U.S. who have this disorder. It is most common in young adults ages 15 to 35. Cyclothymia occurs in both men and women. But more often during adolescence or early adulthood in women than men.

Cyclothymia is a relatively rare disorder that shows periods of elevated mood, depression, and normal mood. It can be difficult to diagnose because the symptoms are not as intense as with bipolar disorder.  But it may be misdiagnosed for clinical depression or another condition due to its mild nature. The only treatment that will help manage both elevated and depressed moods through various methods. If you know someone struggling with this mental health issue please encourage them to seek professional advice from their doctor. We will help you by providing the best possible treatment. Reach out to us today.