Most people are not comfortable sharing their thoughts on the topic of sex, let alone talking about it with someone they love. It seems that many people have this idea that for a relationship to be healthy and fulfilling, there needs to be regular sexual activity between partners. This is simply not true! Sex does not need to happen every day or even at all in order for your relationship to survive. However, if you find yourself concerned because you are experiencing an issue where your boyfriend won’t touch you sexually, then maybe it’s time for some more serious discussion.

What Does “Boyfriend Won’t Touch Me” Mean? This phrase is a common complaint in sex therapy. Unfulfilled desire is one of the most common complaints that women have in my office. In fact, when I wrote a book called “In The Mood,” I named it that because the desire was top on many women’s lists when they were interviewed about what makes them unhappy in their relationships and sex lives.

This problem is usually easily solved with a little coaching. But because it’s not always easy to figure out the problem at first. This issue is caused by many different factors.

Often, the man himself has no idea what’s going on, but he can easily be educated on how to bring pleasure to his partner. Sometimes the problem is more complicated than not knowing how to turn your partner on. But today I want to discuss this common complaint in detail after receiving it so often recently in my office. There are many signs that depict that “boyfriend won’t touch me”. In fact, this sign is one of the things by which you can detect a problem in your relationship. Here are some of those signs:

There is a lack of affection between you and your partner. In fact, if there is a time that the relationship got stuck in a rut, then you will notice that this situation will be present. The intimacy levels between the two of you have been reduced. This means that my boyfriend won’t touch me anymore or doesn’t love me anymore.

In a healthy relationship, there should be an open line of communication between both partners. However, if the lines are closed and not open for discussion at any point in time, then there might be something going on with your lover’s heart. You cannot make assumptions as to what is going on because he may fear hurting your feelings by telling you what exactly is wrong with him. Therefore it would be a good idea to discuss the situation with him and find out what it is that’s bothering him.

Another sign would be his inability to make decisions without consulting you first. In fact, if he cannot decide even simple things, then this should raise some concern as well. As a matter of fact, this would tell you that there is something going on in his mind that is causing him not to think clearly. He may have been under stress from work or from other problems in life. Whatever it might be, a man who can’t make up his mind about anything at all isn’t worth being with anyway because he will always need you to take care of everything for him – which means your relationship will soon become one-sided.

Lack of Interest in Sex

Another sign that your boyfriend won’t touch me is when he lacks interest or desire for sex. This should be a red flag to you because the lack intimate activity between the two of you will soon lead to problems in your relationship. If there is a time when he does not want to have sex with you, then the best thing that you can do is talk to him and find out what’s going on and why he doesn’t seem interested in having an intimate moment with you anymore.

Inability To Express Feelings For You

There may come a time when he suddenly becomes distant from you, which would mean that something important must have happened within his mind. However, if he is unable to express the feelings that he has for you, then it would mean that something is definitely wrong. If his actions do not match up with his words, then this might end up hurting you because he may be lying in order to protect himself.

Lack of Closeness When Talking

When having a conversation with him, does he get distant? For instance, when discussing matters about your relationship together, does he get far away from you or look away instead of looking at you? Then there might be something serious going on inside his head. He could already have decided to leave the relationship and didn’t want to let you know just yet by avoiding any possible confrontations about it.

Lack of Interest In Your Life

Does your partner seem to have no interest whatsoever in what you are doing with your life? Then there may be something wrong within his mind. If he isn’t interested in what you’re doing or where you’re going, then this would mean that things aren’t working out the way that they should and it might mean that he is thinking about leaving.

Does he not watch romantic movies anymore? Then something might be wrong. When you are watching a movie together, does he try to change the channel when the two of you are watching a romantic comedy? If this is true then there must be something wrong with how your partner feels about you. This would not be a healthy relationship because you should feel loved by your partner – and he would also have to show that love as well.

Not Being Romantic Anymore

Does your boyfriend not try to do romantic things for you? Does he not remember any of the special days or holidays anymore? If this is happening within your relationship, then it may mean that something is seriously wrong with him. He might be trying to push himself away from you in order to give up his feelings for you. There’s no way of knowing what’s going on inside his head, but at least now you know what some of the possible signs are if there is a chance that something important has changed within him over time without you realizing it. There are many possible reasons why your boyfriend won’t touch you. Some of these are:

This is the most common reason why boyfriends will not touch their girlfriends. The fact is, if he doesn’t love you anymore, he’s probably willing to do and say a lot of things to make sure that you break up with him without him having to break it off himself. This may even be the reason why your boyfriend refuses to touch you

If your guy is sick or injured, especially in an area where physical contact will hurt, such as his spine or head/neck area, then it’s no wonder that he won’t want to touch you. Of course, this might just mean that he isn’t feeling well and wants his space, but sometimes it could indicate something more serious. Always check with your partner first before assuming anything and ask what he wants to do.

There are plenty of reasons why someone might have an aversion to certain types of physical contact, such as being ticklish or not liking the idea of anything involving saliva (kissing). While your boyfriend might not be playing “hard-to-get”, he may simply just prefer to avoid touch in certain areas for his personal comfort.

Sometimes, if a man is angry, frustrated, stressed out, or otherwise upset about something then it’s possible that he’ll take that frustration out on you by refusing to touch you. This will only lead to more problems and hurt feelings, so make sure that you look at what is causing this frustration in the first place before assuming it has anything to do with you.

These are the kinds of concerns that may come up because of memories, beliefs, or even worries that he has about something that happened to him in the past that involved touch. For example, if your boyfriend was molested when he was younger, he might be very uncomfortable being touched by anyone. If you think this might be the case, talk to your partner and ask what his reasoning is behind not wanting to be intimate with you.

Sometimes people simply don’t want to forgive easily after a big fight, but instead prefer silent treatment. The same goes for physical distance while having an argument – some partners simply need their space during disagreements and will try anything they can to get it.

How To Deal When “Boyfriend Won’t Touch Me”? 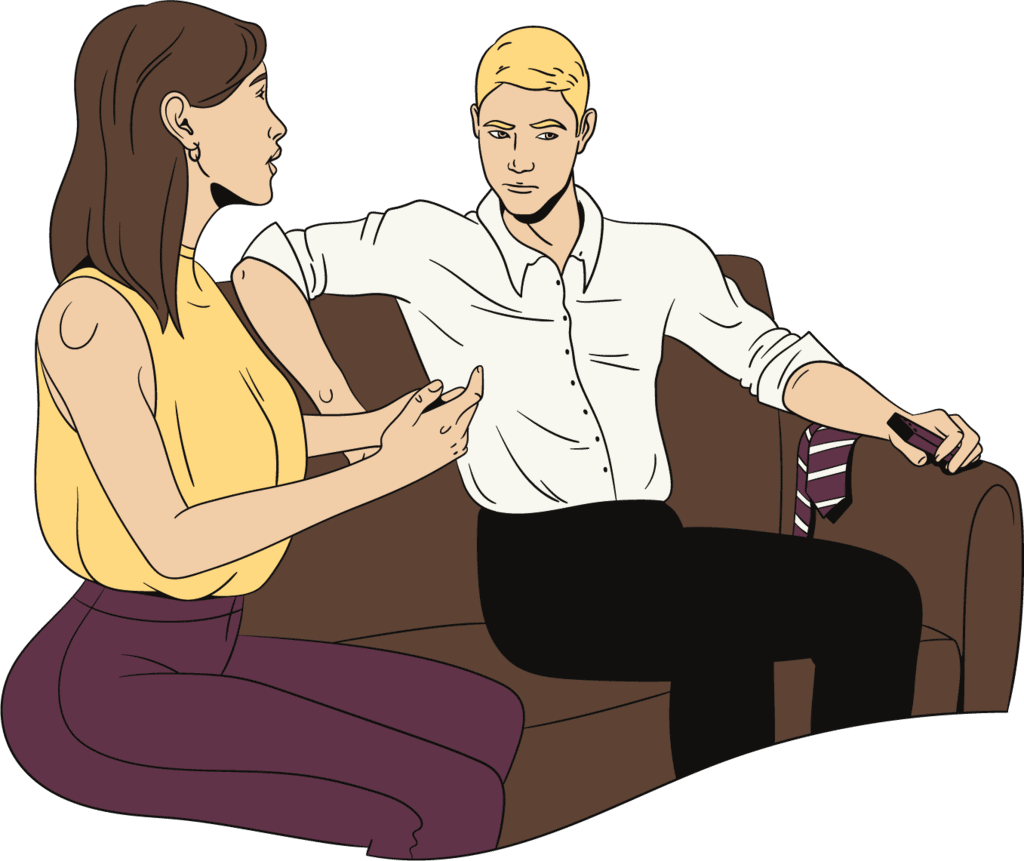 There can be a lot of reasons why your boyfriend won’t touch you. So how do you deal with this when it’s happening to you?

First thing’s first – open up lines of communication when it comes to touch within your relationship. Tell him that something is wrong and that you want to know what is going on in his mind when he decides not to touch you (or initiate sex). From there, you can both agree on something that will make him feel more comfortable and work on it together.

If your boyfriend is sick or injured, then he may need his space and time alone to heal properly. It’s possible that he simply wants you to leave him alone and not worry about sex or intimacy at the moment. If that’s the case, then avoid touching him physically in any way to show your support for his healing process.

Give Him His Space As Needed

Most of you need your space from time to time, especially after a big fight with your partner. In cases like these, it’s best not to try and pursue things further because you might feel offended if he doesn’t want to be intimate. Plus, if he doesn’t want his space right now, he will tell you when the time is right again for both of you to be together intimately once more.

Sometimes we like to jump to conclusions and assume that we know what’s going on in our partner’s mind. For example, you might think that he won’t touch you because he isn’t attracted to you anymore or that it has something to do with the fight you had earlier today. When it comes down to it, however, assuming things will only get you further confused and upset when there is nothing wrong at all.

In conclusion, it’s alright if your boyfriend doesn’t want to be intimate with you at the moment. The main thing that you have to remember is that there can be a lot of different reasons why he might avoid touching/intimacy with someone else, including yourself. In these kinds of situations, it’s best to simply open up lines of communication and figure out what’s going on first before jumping to any conclusions about his reasoning behind not wanting physical contact right now.